Worth the long wait. 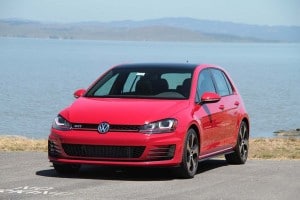 The U.S. version of the VW GTI arrives about a year after its European launch.

It’s been a frustrating year for Volkswagen fans, the automaker forcing them to watch the roll-out of its all-new, seventh-generation Golf in Europe and much of the rest of the world while waiting for the Golf and GTI models to make the jump across the Atlantic.

Finally, they’ve arrived – but are they worth the wait? The all-new 2015 VW Golf and its sporty spin-off, the GTI, certainly seem to have everything going for them.  They’re bigger, roomier, more visually appealing, and while more powerful, they’re also more fuel-efficient, whatever your powertrain choice.

That seemed like an awfully difficult formula to dismiss as we headed out West to take the new compact models for the requisite test drive through the San Francisco Bay area. And, as we quickly discovered, the Golf and GTI more than lived up to our initial expectations. 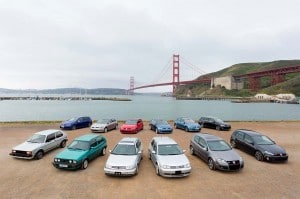 There's plenty of options with the new Golf family.

Insiders know the new Golf as the Mk7, a reference to it being the seventh generation of this popular package since the first Golf made its debut.  Occasionally known to Americans as the Rabbit, the latest version migrates to the German maker’s all-new MQB “architecture.” We won’t try to spell – or pronounce – the German phrase that’s short for, which translates into Modular Transverse Matrix.

Just know it’s an all-new platform that will ultimately be shared by a wide range of products sold within the broader Volkswagen AG family, including brands as diverse as Skoda, Seat and Audi – the latter using the MQB for its new A3 line-up.

(Audi’s future begins to rise out of the Mexican dust. Click Here for more.)

Dimensionally, the U.S. version of the 2015 Golf is 2.1-inches longer than the Gen-6 model, 0.5-inches wider and 1.1-inches lower – though careful packaging means you will get even more interior space, front shoulder space increasing by 1.2 inches, for example. And assisted by a lower load-in height, cargo capacity jumps to 93.5 cubic feet.

The Gen-7 Golf also follows an increasingly common pattern among manufacturers to shed mass wherever possible – mass being the enemy of both mileage and performance, as any good automotive engineer will explain.  Considering the diminutive size of the hatchback, losing about 80 pounds compared to the outgoing model is no small feat. Much of that comes from putting the body itself on a diet. Yet by adopting significantly more high-strength and ultra-high-strength steel, the new Golf is significantly stiffer than the Mk6 edition. 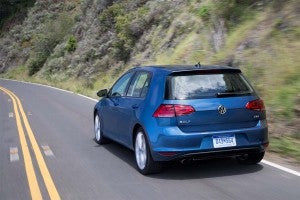 The 7th-generation Golf is lighter, larger, more powerful and more fuel-efficient than the old hatchback.

When it comes to the latter, the traditionally boxy Golf adopts a much more sleek and sophisticated appearance for 2015, all the more impressive considering the inherent angularity of hatchbacks. You’ll immediately recognize both the Golf and the GTI at first glance. They maintain their somewhat cab rearward appearance. But Credit the lower roofline with giving the family a more low-slung and sporty appearance.

The face of the Golf undergoes some of the most distinctive changes, with a narrower upper grille framed by more sharply creased headlights. Until recently, the VW brand has had a design philosophy that favored slab sides with few angles and curves. The new Golf, however, features a more sculpted design, with a distinctive body line running nearly the length of the body.

Inside, the hatchback has a new and more distinctive layout, and with a clear intent to use more upscale materials – such as the brushed aluminum-like trim on the center stack, the overall feel is one of a much more refined and expensive vehicle than the Golf’s traditionally utilitarian approach. 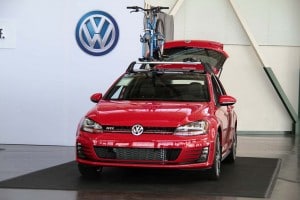 The GTI gets an extra 10 hp with the optional performance package.

The gauge cluster is more attractive but retains the emphasis on easy-to-read graphics – and now gets a new multi-function monochromatic display between the tach and speedo. It provides a wealth of information about vehicle functions, hands-free calling and audio settings.

A new 5.8-inch capacitive touchscreen LCD display also anchors the center stack on all 2015 models, whether or not a buyer opts for a navigation system. It handles all manner of duties, and is one of the easier systems to operate.  Also offered for 2015, the VW Car-Net connected vehicle services.  One of the nicer details is the proximity sensor that detects when a hand approaches the screen. Much like the Cadillac CUE system, that signals the system to pop up additional on-screen buttons that would otherwise clutter the display.

(VW Reveals Extreme GTI Concept – But only Gran Turismo fans will get to drive it. Click Herefor more.)

The new Golf features such standard details as power doors, locks and mirrors, as well as air conditioning. Move up in the price scale and the list of standard features grows, the GTI, for example, including a Panorama sunroof in the base price.

The GTI also gets 18-inch alloy wheels, Bluetooth, heated front seats and a driver selectable mode system that allows you to customized, among other things, steering responsiveness. The GTI suspension also is lowered by 0.6 inches.

Until the arrival of the Golf R in early 2015, the GTI will be the package of choice for performance fans. In standard trim, you’ll get VW’s turbocharged 2.0-liter inline-four making 210-horsepower and 258 pound-feet of torque. Opt for the performance package and you’ll boost the pony count by 10, though torque remains the same. The GTI will come with a 6-speed stick as standard equipment, but a DSG is optional and will now offer launch control.

If you’re willing to wait yet a bit longer, the Golf R will turn up the boost and pump out a hefty 290-hp, with torque jumped to 280 lb-ft, which should make it one of the more serious contenders in the “hot hatch” segment.  Offered with either a 6-speed stick or 6-speed DSG, the R’s engine will go through extensive modifications to its cylinder head, pistons, turbocharger and injection system. And to make sure all that power is put to the pavement, it will come stock with VW’s 4Motion all-wheel-drive system.

While the horsepower and torque numbers are impressive, what’s particularly noteworthy is how VW engineers have managed to boost performance while also driving up mileage. Though the Golf R’s EPA rating won’t be available until closer to launch, the GTI – minus the performance package – gets a 3 mpg bump in its 34 mile per gallon Highway number, the City rating at 24, and the Combined number 27 mpg. 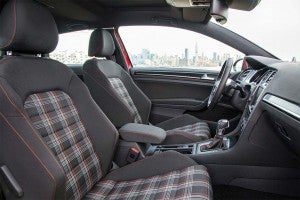 The familiar plaid of the VW GTI interior.

For those who put fuel economy above performance, there’s the 2015 Golf TDI, which will deliver 26 mpg City, 42 Highway and a Combined 35 miles to the gallon. For those who might think back to the diesel Golfs and Rabbits of decades back, well, don’t. This is an unexpectedly sporty package, the oil-burner turning out a reasonable 150 horsepower – up 10 from the outgoing model – but a solid 236 lb-ft of torque.

For the diesel-phobic who still crave good mileage – and a low price tag — the base engine is the 1.8-liter naturally-aspirated four that replaces the old 2.5-liter inline-five. It makes a fair 170-hp and 200 lb-ft. It isn’t a particularly inspiring package, especially in the base Golf trim.

So, those who want a bit more pep without too much sacrifice in terms of fuel economy or their monthly payments would be wise to consider the upgraded 1.8-liter turbo, rated at 170 hp and 200 lb-ft. We found that a lot more fun to drive, whether running down the highway or handling the curves of the Oakland Hills. Yet the turbo four manages to deliver 26 mpg City, 37 Highway (up a full 6 mpg) and a Combined 30.

There’s also the e-Golf, which we plan to review separately, as well as the Golf Sport, of which VW plans to offer a limited edition of just 650 for the U.S. market. Despite what the name implies, there are no under-hood changes, but you do get the turbo-four, a unique front lip spoiler, a rear spoiler, chrome exhaust tips and side skirts. 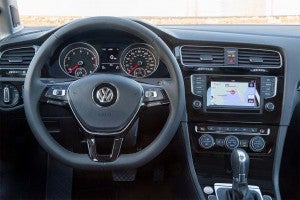 All new Golfs get a touchscreen display.

As for safety features, all models get the requisite electronic stability control, as well as VW’s new Post-Collision Braking system, designed to reduce the likelihood of a secondary crash. Depending on the model, Forward Collision Warning, Blind Spot Warning, Active Cruise Control and a rear camera are available.

As you can imagine, with this many different models in the Golf family, there’s a wide range of performance characteristics.  We were delighted by the performance and handling of the 2015 Volkswagen GTI, as might be expected. It’s quick and nimble, with precise steering, and the sort of handling that makes you want to look for the curviest roads you can find.

The torquey diesel was one of the more pleasant surprises, however, delivering a nice sense of power as its torque kicks in.

We’d suggest only the most budget-minded of buyers opt for the naturally-aspirated four. Its limited acceleration will likely disappoint others. 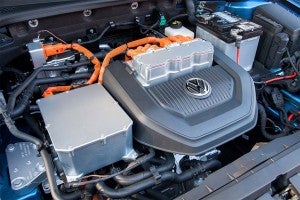 But with that exception, it is hard to find fault with the new 2015 Volkswagen Golf family.  The new line-up is not only more eye-catching than the old Mk6 range but a lot roomier, sportier and more fuel-efficient. Indeed, it’s hard to find much to criticize.

VW has set some ambitious goals for itself in the U.S. market – though it has fallen short over the last couple years. The delayed launch of the Mexican-made 2015 Golf was clearly a factor. We’re betting a number of potential buyers have simply been waiting for the delayed debut of the new hatchback. And based on what we experienced during several days driving, we wouldn’t be surprised to see VW’s momentum bounce back in the months ahead.