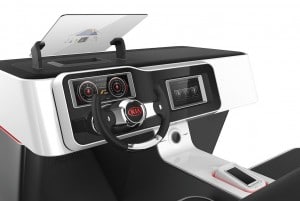 Kia's User-Centered Device (UCD) uses a wide-screen, head-up display to give drivers information such as speed, navigation or traffic information.

Kia continues to find ways to grow its customer base whether its with pricing, improved quality and now it’s looking toward interactive technologies to differentiate the company and its vehicles from the pack.

The Korean maker showed a couple of concepts at the Consumer Electronics Show in Las Vegas that can be used with its UVO system. The first is a User-Centered Device (UCD). The UCD uses a wide-screen, head-up display to give drivers information such as speed, navigation or traffic information across 18 inches above the instrument cluster. It’s joined by a 12.3-inch TFT-LCD display that provides the data in 3-D.

The second is the In-Vehicle Information (IVI) concept, which uses a multi-display system based around a 20-inch multi-touch center-console display. The system synchronizes with a tablet or smartphone to interface with the concierge service, social networking, parking assist and smart radio functions.

IVI also boasts “Smart Radio” functions that allow users to personalize playlists according to the the person’s mood or based on five templates for different driving environments, such as summer driving on a coastal road, all delivered via Kia’s proprietary music service.

This “mirroring” technology allows passengers to enjoy their own music and video experiences while vital information, such as pre-programmed smartphone navigation notifications, is simultaneously provided to the driver.

Kia also gave show-goers a look at the UVO system can be used with an electric vehicle. The UVO EV smartphone app with telematics functionality specifically designed for electric vehicles.