In search of the design "that is part and parcel of the Mustang's heritage." 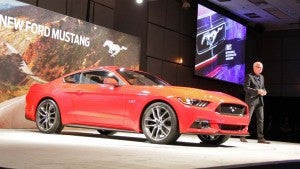 It was a plum assignment – and a risky one. Right from the start, Ford Motor Co. designers knew they had to preserve Mustang’s signature cues even as they set out to develop an all-new sixth-generation pony car that would mark the Mustang’s 50th anniversary.

And beyond the basic visual expectations of Mustang fans around the world, they knew they’d have to deal with a range of legislative challenges: new fuel economy and emissions standards, stricter safety mandates – even the pedestrian safety requirement set down by the European Union.

The man cracking the whip was J Mays, Ford’s global chief designer and chief creative officer, who reveals that Ford built 50 different models as his team finalized the design of the 2015 Mustang unveiled this week. 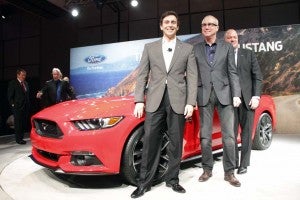 “Some of them were really beautiful,” Mays said during an interview with TheDetroitBureau.com, following the unveiling of the new pony car.  “But they lacked the confidence and ability to project power “that is part and parcel of the Mustang’s heritage, Mays said.

The new Mustang’s silhouette, with its long hood, short deck and muscular haunches, is one of the market’s most familiar – and a basic shape that has carried over from generation to generation.

(There’ve been plenty of potentially radical alternative Mustang designs over the last 50 years. Click Here to check some of the most odd and interesting ones.)

In the process of developing the new 2015 model, Mays’ team struggled to maintain the most familiar – and essential – design cues, such as the long hood and the three-bar taillamps. But they also cleaned up a few details, for one thing removing the bumper “shelf” that hung off both nose and tail.  That helps create better balance to the car’s overall proportions, while giving the new Mustang’s side profile a more modern, contemporary appearance, Mays said.

“In addition, the A- or front pillar is tilted rearward so it creates one continuous line that sweeps down (from the hood) to the rear of the car, Mays noted, adding that, “There is no three-box. It’s a perfect tear drop.”

The steeper rake of the windshield has multiple benefits. It also enhances the overall aerodynamics of the new Mustang which, in turn, should help both fuel economy and performance. Other key steps to enhance the aero of the pony car include carefully sculpted outside mirrors and the extensive use of underbody cladding to smooth out airflow between the bottom of the car and the road.

Ford has sold more than 9 million Mustangs over the past 50 years and many of them remain on the road, so one of the key missions was to insure loyalists could trace the Mustang DNA in the new car.

But company insiders say the passion for the project was readily apparent among the design team chosen for the project after it was approved by the Ford’s board of directors in 2009.  The first preliminary sketches for the next Mustang started filtering into his office “about three days” after that, Mays recalled.

One of the most familiar design elements of the Mustang, from the original 1964-1/2 model through to the new pony car, is the so-called “shark nose.”

“You’ve got to have that,” said Mays, noting that while the car was designed in a studio close to Ford headquarters in Dearborn, the final design also incorporated ideas from the company’s other design  centers around the world.

A decade ago, Mays was a pioneer of the retro trend sweeping through the auto industry.  Significantly, that term wasn’t used once in either the 2015 Mustang preview or in his subsequent interview with TheDetroitBureau. The new phrase is “heritage,” and the goal for Mustang was to come up with ways to modernize classic cues.

A good example is the new approach to Mustang’s traditional 3-bar taillight package, the new design more sculpted and inviting you to “run your hands around them, suggested Mays, during the car’s live debut. The 3-bar approach was echoed on the face of the new Mustang in the angled, 3-bar LED accent lights.

It wasn’t just a new body that the team was tasked with designing. The 2015 Mustang also needed a major rework of the coupe’s cabin.  And while the new model is clearly more modern – with such details as a large touchscreen for the MyFordTouch infotainment system, along with much more modern materials, it deliberately incorporates other elements of Mustang’s heritage from the 1960s, said Mays, suggesting, “If you look inside you can see hints of the original Mustang throughout the interior,” said Mays.

(Click Here to check out the new 2015 Corvette Z06 coming to the Detroit Auto Show next month.)

For all the work that goes into a new car in an effort to please the eyes of potential owners, some of the toughest demands now come from the regulatory side.  Mays pointed to the European pedestrian protection standards which have proved so difficult for many designers to live with.  But he believes the new rules actually worked to Ford’s advantage by giving designers the ability to incorporate a break in the hood line.

“It creates a section that angles downward to give the nose its shape. That was necessary but one of the really cool things. It worked perfectly in our favor, ” Mays said.

The sides of new Mustang, which also had to meet the European pedestrian protection standards, are “masculine and three dimensional,” according to Mays.

In the old days, designers and engineers seldom worked together on a vehicle project. Often, a designer would toss a sketch to the engineering team and leave them to worry about how to build it. Ford today tries to bring both sides into close cooperation, and that paid off when engineers pressed to widen the 2015 Mustang by 1.6 inches.

Designers, in turn, “used the 40 millimeter of extra width to create these beautiful (rear fender) flares. There is no doubt about where the rubber meets the road,” added Mays, who sees that as one of the most distinctive elements of the new design, projecting the power that is part of Mustang’s heritage.

It’s also makes it easier to see the differences when the 2015 Mustang is placed next to the 2014 version, he said.

The 2015 Ford Mustang could become the legacy car for Mays, 59, who will step down Jan.1 after spending 16 years as the maker’s top designer.  “I had to go out on high note. It doesn’t get much better than this,” Mays said with a satisfied smile.