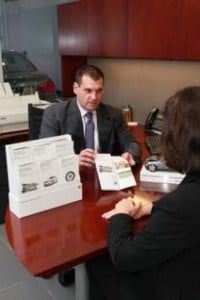 Car dealers have been able to regain momentum since the government shutdown ended.

Despite the turmoil created by the government shutdown – and the subsequent impact on consumer confidence — sales of new vehicles are showing unexpected resilience in October with analysts predicting a welcome increase for the full month.

Sales are expected to rise 7% in October to a total of 1.22 million units, according to data tracking service Kelley Blue Book, with other analysts making similar predictions. A combined forecast by J.D. Power and LMC Automotive was even more bullish, with an anticipated 8% gain for October.

“Sales in the third week of the month strengthened relative to the first two weeks, which is evidence of vehicle buyers delaying their purchase until the shutdown was resolved,” said Power’s senior automotive analyst John Humphrey.

That’s in sharp contrast to the dire predictions made by some industry executives earlier in the month, notably Hyundai Motor America CEO John Krafcik, who had cautioned that sales could decline as much as 10% in the wake of the government shutdown.

A downturn would have been particularly frustrating for an industry that had finally gained some serious momentum – only to see September deliver the first year-over-year sales decline in 27 months. But KBB senior analyst Alec Gutierrez said several factors appear to be contributing to an October rebound following the end of the government shutdown. And it doesn’t hurt to be comparing the latest month’s numbers with October 2012, when sales were heavily affected by Hurricane Sandy’s impact on the East Coast.

“The government shutdown didn’t impact consumers’ growing appetite for buying new vehicles,” said Gutierrez. “The expectations were that car buyers would wait on the sidelines, but because of pent-up demand and credit availability, car sales are expected to increase,” which, barring another economic setback, means the industry is on track to reach about 15.6 million units in 2013, he said.

Several segments of the market appear to be driving the latest sales upturn, notably crossovers and pickup trucks. It helps that both segments are getting a fresh injection of new product which traditionally brings buyers into showrooms.  General Motors, for example, has completely redesigned its Chevrolet Silverado and GMC Sierra pickups for 2014, as has Toyota with its full-size Tundra.

Gutierrez predicted most manufacturers will enjoy healthy sales growth in October. Toyota, whose Camry and all-new Corolla topped the midsize and compact car segments last month, could post the greatest improvement from last year at 15.9%.

Ford also is expected to report excellent sales results this month, driven largely by the demand for the F-Series pickup line as well as the recently redesigned Fusion and Escape. Chrysler, Honda and Nissan also are expected to post double-digit gains, largely on the heels of new redesigns and introductions such as the Jeep Cherokee, Honda Accord and Nissan Altima.

Significantly, the anticipated upturn this month is coming on a retail level, rather than being buoyed by a surge in fleet sales. That’s good news for the industry because fleet business – especially in the daily rental segment – tends to deliver lower profits.

J.D. Power said fleet sales, as a share of overall industry demand, should drop to somewhere between 17% from 19% in October, while fleet share for the full year is expected to come in below the 18% mark.

“The industry didn’t escape the turmoil in Washington, but the disruption was not enough to stop the auto recovery,” said Jeff Schuster, senior vice president of forecasting at LMC Automotive. “Light-vehicle sales volume north of 16 million units in 2014 is well within reach; however, there is a higher level of risk that consumer confidence could be distracted again in the first quarter if, as expected, the debt ceiling gridlock returns.”

(Governors of eight states agree to steps that could significantly boost battery-car sales. For the story, Click Here.)

Devastated by its worst downturn in decades, the auto industry has been a major engine of the otherwise slow U.S. economic recovery over the last three years. And it appears to once again be regaining momentum at a quicker pace after the government shutdown that has helped drive down consumer confidence, according to the Thomson Reuters/University of Michigan Surveys of Consumers, which is conducted each month by the university’s  Institute for Social Research.

Perhaps the most significant finding, according to U-M economist Richard Curtin, is that consumers believe the government has become the primary obstacle to more robust economic growth. When asked to describe in their own words what they had heard about recent economic developments, the number of consumers that negatively mentioned the federal government in October was the highest in the more than half-century history of the surveys.

“This was the third time in the past three years that negative references to the government’s impact on the economy set another half-century peak level,” Curtin said. “Indeed, after each repeated advance in optimism during the past three years, a revival of the D.C. follies promptly reversed the gain.”

Nonetheless, the battered consumer will heave a sigh of relief during the brief stoppage between rounds in the D.C. fight,” the economist said.