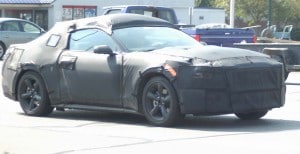 The 2015 Mustang is caught in the open testing. All photos by Jim Dunne, Car Spy.

It’s a big year for the folks at Ford Motor Co. Not only are they ready to mark the centennial of founder Henry Ford’s first moving assembly line but they’ve begun the countdown to the Golden Anniversary of the Mustang, the original pony car.

Better yet, the April 2014 milestone is expected to be marked by the introduction of the next-generation Ford Mustang, with well-placed sources anticipating its unveiling to place during or immediately prior to next year’s New York Auto Show – the original ’64-1/2 having been revealed at the 1964 NY World’s Fair.

There’ve been plenty of rumors about what Ford has in store for the new Mustang and these spy shots seem to support the conventional wisdom that the muscle car will finally migrate from a live rear axle to a more modern independent rear, in line with what Chevrolet has done with its competing Camaro model.

Long the leader in the pony car segment, Ford has been struggling to fend off that rival since the Camaro returned to the market several years ago, so it won’t have much room for error when the new Mustang makes its debut.

Designers have reportedly moved away from the retro look of the current Ford coupe/convertible package, though this heavily camouflaged model  caught by intrepid spy photographer Jim Dunne hints that the classic Mustang shape isn’t about to undergo a major transformation.

Ford has apparently offered some hints of what’s to come in the form of the recent Evos concept – albeit a bit more muscular.

The independent rear suspension is expected to permit Ford to share the platform of the sixth-generation Mustang with other models, apparently including a sporty Lincoln coupe due later in the decade as the maker continues its push to revive that luxury brand.

As for power, Ford is apparently gearing up to expand the option list for Mustang buyers. 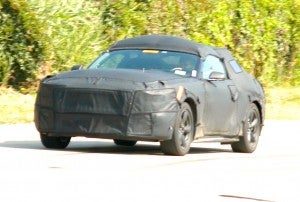 The new Mustang is expected to borrow much of its design cues from the Ford Evos concept.

There’s a near 100% likelihood the classic 5.0-liter V-8 will be back, albeit with improved horsepower and torque numbers to better challenge Camaro. Also on tap, Ford is apparently gearing up to bring out new turbocharged inline-four and V-6 packages which may be given the EcoBoost badge.  We’re hearing numbers as high as 300 hp for the turbo four-banger.

The Dearborn maker has already begun banging the drum for Mustang’s 50th and we’re expecting more than just the usual auto show fare when the Gen-6 pony car makes its world debut next spring.  Could Ford return to the old World’s Fair ground in Flushing Meadows, in the borough of Queens? That’s apparently one very strong possibility.

Incidentally, word has it that a limited-edition run of the sixth-generation Mustangs will be sold as 2014-1/2 models to honor the original designation.