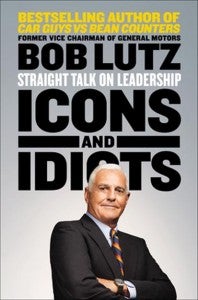 Bob Lutz describes some of the most memorable leaders he's works with in a 60-year career.

How many current or former auto executives have the experience, talent, charisma — much less the cojones — to write an entertaining, informative book about one’s bosses and inspirational leaders? There’s only one and, you’re right, it’s Bob Lutz.  Okay, so he’s an octogenarian – but he is not over the hill – far from it. He is sharper, clearer and more focused than some of today’s wannabe CEOs and COOs.

Lutz’s multi-decade experience covers the best of times and worst of times in the contemporary auto history from the sixties through GM’s 2009 bankruptcy.  Along the way he made history and rewrote some, made some good decisions, some not-so-good, had c-suite executive positions with major auto brands in Europe and America – and at every milestone along the way in an enviable career he’s worked for and been inspired by some very unique leaders and characters.

Icons and Idiots, his just published review of the eleven leaders and inspirational forces that shaped and molded his business career and life is an interesting read. I’d turned the pages in his previous book, Auto Guys and Bean Counters, but found it less readable because of the ‘here’s what went wrong and why” focus. The new work from the ultimate car guy is analogous to having a private conversation with him after a good dinner, some excellent wine and maybe a Cohiba.

Icons and Idiots is more a remembrance. Some good memories, some not so good but all well told even when very critical. This, however, is not a hatchet job with evil intent – it is his take minus the gloss, minus the varnish. Just his memories. Matter of fact, in parts it is very funny.

Each has a chapter of their own with a succinct descriptive line that sets the tone for the executive. Then the descriptions begin in exacting detail from their physical description, to style of speaking, to what they wore, their proclivities and foibles, executive style – hands on or hands off, ability to work with others at their level and those above and below in the business hierarchy and other traits. Nothing is spared or apparently forgotten. Not all of the author’s memories are fond but they serve as the foundation each provided him in the attainment of personal and professional goals in a lengthy and sometimes controversial business career.  Lutz has never, ever been known to avoid a comment, scathing or otherwise.

Icons and Idiots makes for perfect summer reading on the beach, near the pool or just to have the opportunity to have a semi-private conversation, albeit one way, with one of the key automotive executives and outspoken leaders of modern times. And in reading this book one can almost hear his gravelly voice.

Incidentally,I had the opportunity to interview Lutz on another topic prior to reading this book but as a prelude asked for his opinion of today’s Detroit CEOs. Here’s the verbatim response:

“I never worked with any of them so it’s tough to say, but I think the Detroit Three are blessed with about the best leadership they’ve had in decades. Allan Mulally is terrific. Marchionne is terrific and a little off-the-wall in some ways but I admire his courage in taking on NHTSA (over the proposed Jeep recall). It was high time somebody did that because NHTSA was bullying everybody around. They’d get a few letters and then start threatening you with all kinds of stuff if you did not do a recall. And I guess in this case Chrysler decided there was no need for a voluntary recall and said no. I admire him for pushing back.  And Dan Akerson isn’t a terribly charismatic or personable guy but he runs a tight ship. He makes decisions and he’s not running a popularity contest either. That’s the important thing in effective leadership.”