Blowing by 3 motorcycle cops at 120 mph. 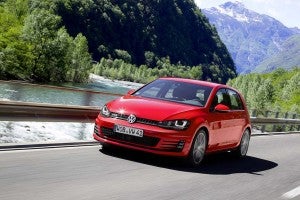 VW is giving serious thought to finally bringing the high-performance diesel Golf GTD to the US.

There’s a sickening twist to the stomach when you blow by a cop doing triple digits on the freeway – never mind three of them riding along in the center lane.  Happily, seeing the word, “Polizei” on their jackets reminded us we were on the German Autobahn.  Squeezing back on the throttle, we nudged our little Volkswagen hatchback back up to 120.

It’s been a slow and difficult slog trying to get American motorists to change their perceptions of diesel cars. If any manufacturer has been successful, so far, it’s Volkswagen, oil-burners now accounting for as much as a third of the sales for some of its key models, such as the Passat, Golf and Jetta.

We’re betting demand could surge even higher once U.S. buyers get access to the Volkswagen GTD, the diesel-powered alternative to the familiar GTI.  Make that “if” they get a chance to buy the sporty Golf variant, as the German maker is still waffling about whether to bring the GTD to the States.  But based on our recent drive of the peppy diesel hatchback we’d be surprised and disappointed if it doesn’t roll into U.S. showrooms in the very near future. 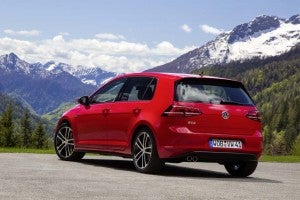 The maker has yet to decide whether it would bring over the 3- or 5-door version of the GTD.

As the name suggests, the GTD is virtually identical to the familiar GTI save for a few subtle exterior and interior details and the powertrain under the hood.  Like the latest version of the gas-powered hatchback, the diesel model is based on the seventh-generation Volkswagen Golf that recently debuted in Europe and which is scheduled to reach American shores during the first half of 2014.

Set to be designated a 2015, the new Golf is 2.2 inches longer and 0.5 inches wider than the outgoing Gen-6 hatchback. It is also 1.1 inches lower and the co-efficient of drag has been reduced by almost 10% compared with what VW calls the A6 platform – not to be confused with the Audi A6. The interior package has been optimized to give 0.6 inches more rear-seat legroom and 1.2 inches of additional shoulder room in the back.

The 2015 VW Golf will be not just bigger and more spacious than the model it replaces but is also 220 pounds lighter, and as much as 15% more fuel-efficient. 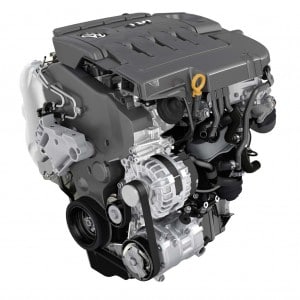 The GTD makes more horsepower and gobs more torque than the base Golf diesel.

Currently, there are three versions of the Golf set for the U.S. market, the gas-powered TSI and GTI models and a relatively modest oil-burning version, the TDI’s common-rail 2.0-liter clean turbodiesel making 150 horsepower, and 236 pound-feet.

The GTD’s 2.0-liter turbodiesel would bump that to 184 hp and a whopping 280 lb-ft. And, as performance aficionados know, it’s torque that gets your tires spinning when the light goes green – and delivers a 0 to 60 launch of around 6.9 seconds.

Yes, there’d be a mileage penalty, but the GTD would still provide plenty of punch while being reasonably stingy with fuel.  In Europe, it gets a 56 mpg Combined rating.  Expect that to be closer to 40  if and when the diesel package makes it to the States.

We expect the VW GTD would maintain its 143 mph top speed.  And we were nudging pretty close to that when we spotted those three motorcycle cops during our lengthy German test drive.

To get the extra power out of the 2.0-liter powerplant, VW makes a number of modifications to its intake, turbo, injectors and exhaust.  It significantly refined the engine for the Gen-7 version, incidentally, the newest GTD adding 14 hp and 22 more lb-ft than the outgoing model. 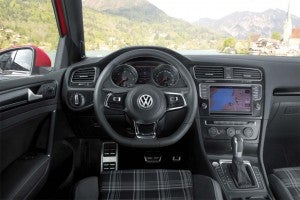 Like the gas-powered GTI, the diesel GTD is more lavishly equipped than a stock VW Golf.

That’s all the more impressive when you realize it’s also got all the necessary after-treatment hardware to meet even California’s latest NOx and particulates standards so VW could sell the GTD in all 50 states.

Like the GTI, it gets some nice exterior details to tell folks you’re not just driving another econo-hatch. But in diesel trim, there ae unique wheels and chrome accent strips, as well as a GTI-like red stripe on the grille.

And as with the gas-powered hot hatch, the VW GTD packs in some premium features as standard equipment, including the Climatronic auto heat/cool system, a touchscreen infotainment center and distinctive gray sport seats.

The list of options is even more extensive, including a huge Panorama sunroof, leather seats, 18-inch wheels and active cruise control. 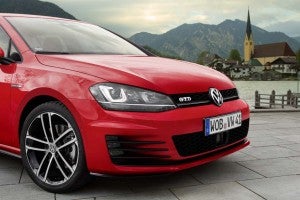 There are a number of distinctive touches for both GTD and GTI, including the bigger air scoops and a red stripe on the grille.

But performance is what matters here and the platform has been lowered another 0.6 inches, the GTD getting a two-stage stability control system and an electronic limited slip differential. The 2.0-liter turbodiesel, meanwhile, is mated to a 6-speed DSG gearbox which delivers virtually imperceptible automatic shifts but which responds with lightning-fast efficiency if you opt for manual mode.

Even a standard-issue Volkswagen Golf is a fun car to drive, but the stiffer, lower suspension of the GTD makes for an even more responsive and nimble driving experience – whether negotiating the twisting roads winding through the German Harz Mountain, or blasting down the Autobahn giving chase to an astonished BMW driver.

Spending a few days with VW managers, we’re moderately confident that the GTD will make it to the States.  But there are some issues yet to resolve, such as whether to go with the 3- or 5-door version, says product planner Andres Valbuena, who adds, “I could see a possibility for both.”

As for pricing, look for a premium nudging perhaps $3,000 over the TDI, he adds, which would bump the Volkswagen GTD somewhere into the $27,000 range.  Considering the blend of performance and fuel economy one would get for that figure, we expect the final decision on whether to bring the little oil-burner to the U.S. is a no-brainer.  Smart shoppers would likely be standing in line once it got here.