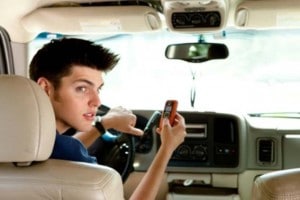 Distracted driving plays a role in fatal crashes, but so does daydreaming, according to a new study.

We’ve been hearing a lot about the “epidemic” of distracted driving, as U.S. Transportation Secretary Ray LaHood has dubbed it, and most fingers point to such high-tech diversions as texting and handheld cellphoning. But a new study says we may be looking in the wrong direction – or perhaps not looking at all.

Apparently, you are five times more likely to be involved in a fatal crash because you were daydreaming or “lost in thought” than if you were distracted by the use of some electronic device, according to new research by the Erie Insurance Group.

The study focused on the 65,000 fatal accidents that occurred in the U.S. over the last two years, identifying 10% as the result of some form of distracted driving – in line with federal and other insurance industry estimates.

But what the research found next came as a big surprise.  It identified 62% of the crashes as the result of simply being “lost in thought.” That might mean failing to recognize a dangerous curve in the road, running into the back of another vehicle, surging through a red light or some other driver error. By comparison, only 12% of fatal accidents covered by the data were blamed on some form of mobile phone use.

Other, more minor factors included operating vehicle controls, such as the heater or radio, and even reaching for an ashtray. Pets were also a problem blamed for 1% of all fatal distracted driving incidents.

“Distracted driving is any activity that takes your eyes off the road, your hands off the wheel, or your mind off your primary task of driving safely,” said Smith. “We looked at what law enforcement officers across the country reported when they filled out reports on fatal crashes and the results were disturbing. We hope the data will encourage people to avoid these high-risk behaviors that needlessly increase their risk of being involved in a fatal crash.”

The survey was released just in time for what the U.S. Dept. of Transportation has declared National Distracted Driving Awareness Month.

While Erie might find plenty of other distractions that can lead to fatal crashes, it continued to emphasize the need for a driver to pull over to send texts, and to avoid using cellphones while driving.

Recent studies support the concern that this has become a serious problem. Last November, as TheDetroitBureau.com reported, a State Farm study found nearly half of drivers under 29 use the Internet at least once a month while behind the wheel.