Former B-24 plant, ironically, to fall for new aviation museum. 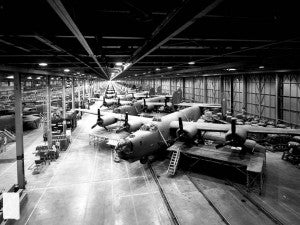 B24s under production at the old Willow Run plant.

Editor’s Note: Most of Detroit’s historic assembly plants have vanished over the years, and the one-time General Motors plant in Willow Run, Michigan, is apparently next to meet the wrecking ball. If the factory simply turned out cars for a few decades it likely wouldn’t have been missed. But as columnist and historian Mike Davis points out, the old factory was one of America’s most important during World War II.

It was a firing pin in the “Arsenal of Democracy,” at its World War II peak in April 1944 rolling out a new four-engine B-24 heavy bomber roughly once an hour. In contrast to the aviation industry, which then bench-built airplanes one at a time, Willow Run employed automotive-type mass-production assembly lines.

To help fulfill President Roosevelt’s vow that America would build 50,000 airplanes a year to counter the Nazi threat, Ford Motor Company had agreed early in 1941 to use its mass-production mastery for plant construction and then assembly of Consolidated Aircraft’s giant bomber.

Wartime publicists portrayed Willow Run as a Detroit miracle, making it the most famous of the Arsenal of Democracy’s thousands of wartime plants. But for some in recent years, Willow Run became more a symbol of Detroit’s decline, one more crumbling piece in the fast-fading Rust Belt.

Willow Run’s history doesn’t really support that interpretation. First, in 1945 there were suddenly many almost-new wartime plants made available but with no purpose after the Allies won the war. A massive Dodge B-29 engine plant in Chicago was scooped up by Preston Tucker to build his rear-engined flop. Wartime ship-building wizard Henry J. Kaiser joined with longtime auto executive Joe Frazer to convert the Willow Run plant to produce Kaiser and Frazer sedans to fill the post-war demand; that plan, too, flopped.

General Motors took over the manufacturing complex in 1953 to fill its urgent need for a facility to build its Hydramatic automatic transmissions after its transmission plant in Livonia was destroyed in a fire. After that, GM started production of the rear-engine 1960 Chevrolet Corvair at Willow Run, adding Nova production, an adjoining Fisher Body plant and finally an engine plant to the wartime aircraft plant. These helped GM meet public demand from 1959 for several decades. In addition, the nearby Willow Run offices and airfield for years served as Detroit’s main airline airport.

So, without question, the wartime Willow Run facility for many years successfully provided the means for the area and GM’s segment of the auto industry to prosper.

In the meantime, though, the public began scorning the cars—but not the trucks—of Detroit’s automakers in favor of foreign brands, most built union-free in new plants far from the Motor City.

Now, even though the domestic auto industry — and the Midwest as a whole — is showing new signs of life, the old General Motors plant at Willow Run, sited amidst the college towns of Ann Arbor and Ypsilanti, is set for a date with the wrecking ball. The great irony is that it may be demolished to make room for the Yankee Air Museum which is intended to celebrate old warbirds like the ones once built at Willow Run.

But the plant’s demise as an auto production center was foreshadowed by the closing and, often, demolition of Ford (Highland Park and Wixom), Chrysler (East Jefferson, Hamtramck and Highland Park), Overland-Jeep (Toledo) and other massive General Motors complexes, notably Flint’s historic Buick and Chevrolet plants.

Efforts to save Packard’s old factory on Detroit’s East side have come to naught and, ravaged by fire and scavengers, it will also soon be taken down. Meanwhile, the old American Motors complex on Motown’s West side is in the process of being gutted.