As Truck Wars Heat Up Ram Ramps Up Production

Automaker’s Warren Truck plant expects to increase production by more than 70,000 vehicles in 2013. 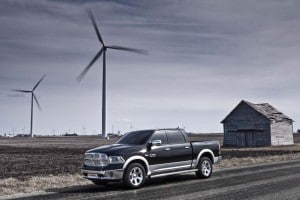 With a reviving economy expected to increase demand for full-size pickups, Chrysler is sharply boosting production of its big Ram 1500.

Truck sales took a spectacular tumble when the economy crashed but with the housing market showing signs of revival pickups could be one of the year’s hot products — and Chrysler is ready to take advantage of the fact that it was recently named North American Truck of the Year.

After winning North American Truck of the Year at the Detroit Auto Show last month, Chrysler is hoping to make some inroads in a segment long-dominated by Ford’s F-150 and, to a lesser degree, the Chevrolet Silverado and GMC Sierra full-size pickups.

But the Detroit automakers aren’t the only ones looking to regain ground in what is traditionally their most profitable segment. Toyota unveiled an updated version of its big Tundra at the Chicago Auto Show last week while Nissan dropped hints about its next-generation Titan.

The Japanese makers have long lagged in the segment.  Combined, they sell little more full-size pickups annually as Ford moved in less than three months — and barely half of what Chrysler sold with the Ram 1500 last year.

Chrysler was long an also-ran in the full-size segment but broke new ground and gained a strong following with its shift to more dramatic styling. Its latest incarnation of the Ram 1500 has continued to win kudos — and strong sales. In November, Chrysler announced that it would add workers at Warren Truck to accommodate growing demand for the revamped pickup truck.

But the company didn’t say at the time how much it planned to increase production.

Even if Ram full-size pickup sales do crest 400,000, it will still be nowhere close to knocking no. 1 Ford or no. 2 GM from their places atop the pickup truck sales charts. Ford sold more than 645,000 F-Series trucks in 2012 and GM sold a combined 575,000 Chevrolet Silverados and GMC Sierras.

Still, Ram remains comfortably in the upper tier of truck makers, well ahead of Toyota’s Tundra.

Pickup trucks remain the most important segment for the Detroit Three because the trucks are huge profit makers.

Still, while the company is increasing production, not all is good news for the company. Workers will begin working four 10-hour shifts instead of five 8-hour days and will have to work more weekends. That will allow the company to increase production without paying overtime, but has caused some complaints from workers about working weekends.