Our resident historian’s recollection of Corvettes then and now. 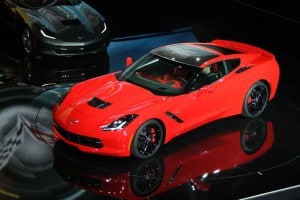 The C7 Corvette at its unveiling last weekend.

TheDetroitBureau.com’s resident historian, Mike Davis was yet to get his license when the first Corvette rolled into GM’s private auto show, known as Motorama, 60 years ago. But he’s been watching and reporting on every ‘Vette since then.

Davis recently released a series of books on the history of Chevrolet and with the new 2014 “C7” Chevrolet Corvette winning kudos as the star of this year’s Detroit Auto Show, we asked him for some remembrances about the Corvette, as well.  Here’s his tale.

What in heck does C7 mean?  It’s the seventh reincarnation of America’s only regular production sports and racing car.  As shown in my Chevy V.1, as I refer to it, the first Corvette  (C1) began as a “concept car,” a one of-a-kind auto show queen, at General Motors’ Motorama at the Waldorf-Astoria in New York in January 1953. 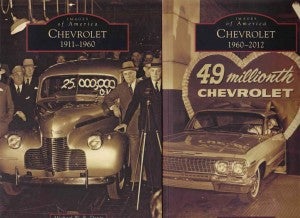 The reception to the little white roadster was so tremendous that GM decided to put it into production as soon as possible—which became a remarkable six months later.   Only 300 of the C1 Corvette were produced that year.  For one thing, no one knew how to speedily produce a fiberglass body such as sported by the C1.  Moreover, the car was ill equipped—with s triple-carbureted version of the standard 235.5-cid six cylinder Chevy passenger car engine combined with Powerglide automatic transmission—to fit the image of an American sports car.

Ironically, as a college student, I drove with a buddy to New York to see the queens of GM’s own auto show—but  I have to confess I have no memory of the ‘Vette..  When Chevrolet introduced its famous small-block V8 for 1955, Corvette was first in line.  The ’55 ‘Vette with standard V8 was priced at $2,934, a reduction from the ’54 model’s $3,523.  V8s have been standard in Corvettes ever since and led Chevrolet’s change from a value purchase to a performance king.

Begging your pardon for being so self-serving, I’ve filled in the gaps in my memory by going back and re-examining the history of Chevrolet for a series of three books I’ve had the chance to see published in just the last year – joining another dozen I’ve attached my name to since 1990.

Certainly, for Corvette fans, the latest two tomes: Chevrolet 1911-1960, released last August, and Chevrolet 1960-2012, which Arcadia Publications put on sale in December, are the most relevant. 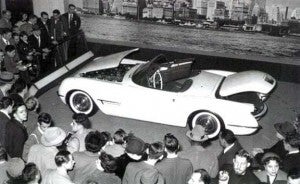 These two volumes provide a good summary of the various predecessors to the new C7 Corvette being revealed to the media on January 13 in a preview of its public appearance at the North American International Auto Show (NAIAS) at Detroit’s Cobo Hall the week of January 19-27.

(For the inside story of how the new C7 Corvette came back from the brink as GM collapsed into bankruptcy, Click Here.)

Intro of the C2 Corvette didn’t come until 1962 with the fabulous Stingray fastback, described (along with Chevrolet’s more mundane cars and trucks) in my Chevy V.2.  Together the two pictorial histories of the bow-tie brand present a total of 454 memorable images of Chevrolet cars and trucks, plants and top executives.

Fifty years ago, the most powerful auto industry exec in the world was the general manager of Chevrolet, managing his domain of engineering, manufacturing and sales.  In more recent years, the position has been successively reduced in importance by GM reorganizations and today no longer exists as such.  All this is described in the captions for the photographs of these two books, each sticker-priced of $21.99. 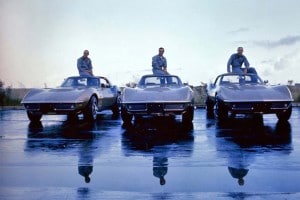 The Apollo 12 astronauts with their identical '69 Chevrolet Corvettes.

Among this huge mass of Chevrolet photos, I endeavored to satisfy first the demands of automotive history.  Chevrolet thus is used as a window into the challenges faced by the auto industry over the last half-century, a period of radical changes.  First came product proliferation that demanded huge investments in new products not necessarily covered by sales.  Trucks came to dominate vehicle sales, import brands outsold domestic cars, and all makers had to deal with a plague of US government regulations.

At the beginning of this report I mentioned a third book.  Its title is The Gas Miser’s Guide, and I was commissioned to write it 39 years ago during the first peacetime gasoline crisis, when Nixon imposed the hated 55-mph speed limit after the Arab Oil Embargo.  But the crisis ended abruptly in March 1974 before the book got published.

Ten years or so ago, in commenting about the then newest gasoline crisis—probably triggered by the Iraq War—I mentioned the book I’d written about fuel economy back in the 70s.  To my astonishment, I received a flurry of emails asking where it could be purchased.  So I contacted the guy who had originally paid me for GMG, wondering whether the final manuscript and clever cartoon illustrations still existed.  Several years later, he called to tell me he’d found most of it while looking for something else in old files.

To end this tale, we decided to post a moderately revised version as an eBook, mostly to see if any buyers were really out there in cyberspace at a couple of bucks a copy.  So if you want to buy (as a download to your electronic reader) The Gas Miser’s Guide, go to smashwords.com.  You can look at the first 20% of the book for free.  Even though some of the data has been exhumed from a literary grave, it still has a lot of useful tips for saving gas, something especially useful for beginning drivers.