General Motors is doing everything it can to whip car enthusiasts into a lather, slowly revealing minute details about the C7, the next Chevy Corvette, which break cover at the Detroit auto show on Jan. 13.

The 47-second video opens dramatically with a shot of the Corvette hidden with a loose-fitting grey cover.

Do a Google search on Corvette C7 and you’ll find dozens of illustrations showing what artists think the next ‘Vette will look like, mixed in with dozens more spy shots of the C7 wear camo completely covering every detail save the basic outline of the car.

As a halo car for the brand, the next Corvette is a huge play for the automaker, one it plans to milk for every ounce of publicity possible. 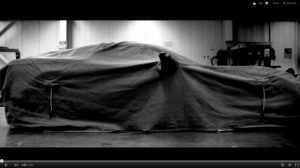 “Performance cars are definitely all about form follows function. But I would say beautiful form follows performance-driven function,” Bennion says.

In the short video, which is posted on the website created just to tease the C7 – one13thirteen.com – we see designers working on clay models and wisps of wind-tunnel smoke flowing of swirl-covered body panels.

There is already quite a bit that is known about the C7. Power will come from an all-new 6.2-liter small-block V-8 producing 450 horsepower and 450 pound-feet of torque, up 20 and 26 respectively. That’s for the base engine. Some have speculated that a twin-turbo V-6 could be added at some point and replacements for the 505-horsepower Z06 and 638-horsepower ZR1 are likely.

While some had speculated that the Corvette would change the basic formula, possibly even going to a mid-engine layout, the spy shots and video show that the look will be an evolution of the C6, not a revolution. The long hood, bubble-back look of the current car remains.

The next video, “Calibration,” goes live on Nov. 29. The teaser image to that teaser video shows a driver wearing a fire suit approaching the car with a helmet on the roof.