MMM Special: Can Ford Fusion Stand Out in Sea of Sameness?

Fusion marketing campaign is very visible - but invisible, too. 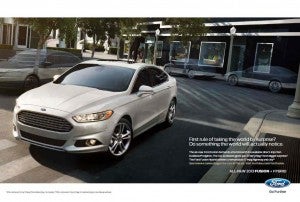 Few automotive segments are more crowded than the midsize sedan market.  So, despite months of hype, hoopla and hope, the official sales debut of the striking new 2013 Ford Fusion might have been underwhelming if traditional ad campaign launch methods were followed.

Global Ford marketing czar Jim Farley clearly wasn’t going to settle for the same-old same-old, it turns out, Ford choosing to follow its own and less traveled road. In doing so, it has created some stunning, provocative and compelling graphics in broadcast commercials and print ads that are amplified with succinct copy that is both persuasive and convincing.

I was able to preview major elements of the new campaign, including elements of the company’s overview from Amy Marentic, Ford’s group marketing manager. And the ad agency perspective from Toby Barlow, Team Detroit’s chief creative director, who revealed the artsy back-story, the agency overview and divulged intricate and elaborate production methods that were used. 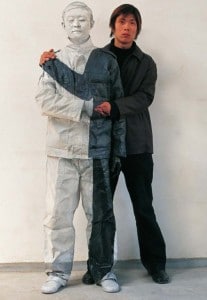 Team Detroit was aware of the unique talents of Chinese artist Liu Bolin, aka the Internet Invisible Man, who is famous for his Hiding in The City sight photos. These are paintings in which the subject, usually the artist, has been painted to match the background which renders him almost invisible in the resulting photograph.

Ford contacted the artist in China, noted Barlow, “We flew him from Shanghai to Los Angeles, described the concept and he agreed to do the project.” Except in this instance the background, competitors’ cars, were painted out and the Fusion became the focus of the ad.

Click Here for a video of how the background of competitive cars was created. The commercial itself was held up because of edit delays caused by Hurricane Sandy but should be ready by the end of the week.  I reviewed the early edit and it is stunning.

Click Here to see the first of the three commercials that introduce the new Fusion ad campaign  that began during NCAA games Saturday and continued with NFL games on Sunday. Other broadcast and cable nets will be added.  Another commercial to be released soon features the Fusion driving off a cliff – amazing real footage shot with six cameras, not CGI. The spot and the behind-the-scenes footage will appear soon in Marty’s Marketing Minutia.

Naturally, Ford and the agency were mum on the media expenditures backing the new Fusion but it was possible to learn a little about what Liu Bolin’s photos cost from an article in The Daily Beast – Beijing, Arts Best. His works are in great demand. One gallery that shows Liu’s limited editions have sold out with prices reaching $250,000 for a photo of Liu in a mural of Chinese dragons. One of his most famous works, the artist in front of a New York City magazine stand sold first for $18,000 and was resold for $46,000.  Wanna guess what Ford paid? That’s gonna be invisible too.