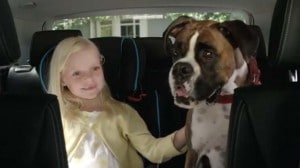 The dog might not be happy but the "Vet" commercial scored for BMW.

According to Ace Metrix the most effective television commercials in the third quarter of 2012 contained two automotive commercials in a field dominated by techy ads and philanthropies. (Click Here to watch.)

Ford’s ‘One Foot Forward’ commercial, touting the new foot operated lift-gate, was only 18 points under the number one commercial. BMW’s funny “Vet’ commercial (think emasculation — which normally is not funny) tied at sixth with an Apple commercial for earphones.

And while not truly a car commercial, AT&T’s anti-texting commercial is aimed at the same target markets.

Here’s a list of the most effective ads of the third-quarter:

A one-day test drive was just announced by Chevrolet in support of the American Cancer Society (ACS) during  National Breast Cancer Awareness month which runs throughout October. Chevy will contribute $10 to the Society’s Making Strides Against Breast Cancer program for each test drive taken at a Chevrolet dealer, up to a total of $130,000 or 13,000 test drives. All Chevrolet models are eligible for the test drive contribution.

“By visiting a Chevrolet dealer on Oct. 6, consumers can see and experience for themselves why we sold a record number of cars, trucks and crossovers last year, and help the ACS fight for more birthdays,” said Don Johnson, vice president, Chevrolet Sales and Service. Last year with Chevrolet’s support, the American Cancer Society raised $1,079,633 in contributions to Making Strides Against Breast Cancer. The money helps fund research, wellness and breast cancer awareness education, and support for breast cancer patients and their families.

Take this test drive tomorrow and help give the gift of life. And be sure to check out what other car advertisers are doing during this special month.

Mazda announced Russell Wager has joined the company as VP marketing directing all aspects of U.S. marketing communications, including print and electronic advertising, social media, and the MazdaUSA.com website, among other duties. It’s a homecoming for Wager who was, early in his ad career, director of Mazda North America’s account at WB Doner Advertising. For the past few years Wager has lived in Asia, most recently as senior VP, managing director at DDB Advertising in Beijing and president, TBWA/Hakuhodo International supervising the Nissan business in Tokyo. He also has senior automotive advertising experience at TBWA\Chiat\Day and davidandgoliath on the Kia account.  Readers may recall an MMM column about Wager walking from Nissan’s headquarters in Yokohama to his home in Tokyo on the day of the earthquake and tsunami, a journey of some 20 miles. Now that’s client dedication. 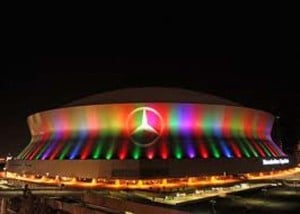 Recently I came across Lincoln Merrihew’s blog for Compete about consumer recall of automobile commercials in this year’s Super Bowl. Compete asked 644 online consumers which auto brand first came to mind when thinking about the 2012 Super Bowl.  Respondents could choose any brand.

The results are interesting in view of the ranking battle that becomes a Super Bowl commercial obsession, especially among auto brands vying for the number one spot. Here are the results of the hose surveyed who watched the game Compete study:

And here’s the graph of their study. 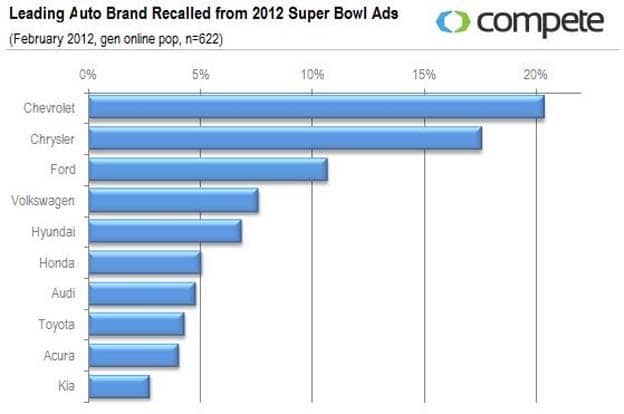 Super Bowl XLVII – When you’re name’s on the stadium

Over lunch at a Mercedes event more than a year and half ago, I asked Steve Cannon, then marketing veep and now president of the tri-star brand, if Mercedes would be an advertiser again in the 2012 Super Bowl.

On background he told me “no’ but only because they had naming rights for the stadium in New Orleans and wanted to make a very big splash with XLVII in the renamed Mercedes-Benz Superdome and had several new models to introduce. That was then. Now its big time news, much to the chagrin of other car advertisers – Mercedes will join Audi, Kia, Hyundai and Cars.com who have already ordered spots in the CBS broadcast whose commercials Orleans next February in their venue. Media mavens estimate the cost of a :30-second commercial between $3.7 and $3.8 million or $123,333 per second but then the broadcast the past two years has exceeded 110 million viewers.

(And one may recall that General Motors’ former ad czar, Joel Ewanick, famously opted out of the upcoming Super Bowl over cost – about the same time he dissed Facebook and announced the mega-buck deal with Britain’s Manchester United soccer team that apparently cost him his job.)

The Ace report detailed above also noted a lackluster performance by car advertising and mega bucks expenditures during the Olympics Games in London. Olympic ads in Olympic broadcasts, a report from Ace Metrix noted, failed to cross the finish line as a gold, silver or bronze medalists, in fact none were in the top ten. Oops. 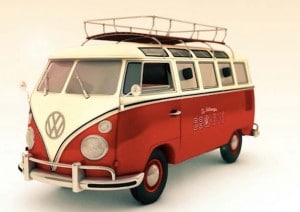 Looks like an update of old Volkswagen van, but wait … it’s the VW BBQ van, a full-scale model of VW Transporter T1 van created for Volkswagen Netherlands by Achtung! an Amsterdam create agency. Click here to see it in action.

The unique, one of a kind giveaway was a prize in a FaceBook contest.