But don’t expect the Japanese luxury maker to keep up with its German rivals. 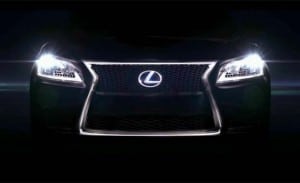 Expect to see the Lexus "spindle" grille on more products in the future.

Shifting market trends have changed the face of the automotive luxury market – leading some manufacturers to flood showrooms with new models. By comparison to its German rivals, Lexus has taken a relatively cautious approach to product proliferation but that may have to change, suggested the Toyota luxury brands top U.S. executive.

While Mark Templin, general manager of the Toyota luxury brand, insists he is “not a big fan of” the rampant product proliferation “that calls for having 100 different models in your line-up,” he told TheDetroitBureau.com that Lexus is closely evaluating market trends and may very well need to add new models in the not-too-distant future.

The biggest challenge, he laughed, is that, “We’re running out of the alphabet,” as makers not only add more models but shift to alphanumeric naming policies.

The Lexus LFC Concept could reach showrooms shortly after mid-decade -- if it gets formal approval.

The most likely addition to the Lexus line-up, Templin hinted, would be a compact crossover smaller than the current RX line, one that could directly target competitors like the Mercedes-Benz GLK, BMW X3 and Audi Q5.  But Lexus is in no rush, the executive cautioned, since the RX remains the best-selling luxury CUV by appealing to a broad range of crossover buyers.

The other segment under close study that Templin would discuss would return Lexus to the supercar market.  The maker has all but sold out its LFA supercar and no additional production is planned.  But the maker is weighing the potential for its potential successor.

“The LFC (concept) we showed in Detroit this year was a smash hit,” Templin asserted, “and everyone is asking us to build that car without change.”

But he cautioned that if Lexus does bring the LFC to market it could take as much as four years to complete its engineering. Templin acknowledged that might seem to run counter to Toyota’s past approach to product development – which emphasized speed to market – but added that Toyota “has started to build cars more slowly again.”

That appears to be a response to the quality and safety problems the maker faced several years ago, which some have blamed on an over-reliance on computer simulations and a lack of slower real-world testing.

The other area where Lexus is likely to expand its portfolio is in the hybrid market, Templin indicated during a lengthy interview.

“Absolutely,” the executive stressed, “we’re dedicated to hybrids and will have a lot.” By 2014 or 2015, Lexus expects to have at least eight hybrids, in fact, in its global product portfolio – though not all will necessarily make it to U.S. shores.

The maker already has more than any other luxury marque and is just getting ready to roll out a new version of its flagship Lexus LS 600h model.  Meanwhile, the recently added ES 300h is out-performing the maker’s initially ambitious targets – dealers in San Francisco and some other parts of the country having to put customers on waiting lists for the hybrid sedan.

Not all gas-electric offerings have been big hits, though.  The compact HS 250h failed to generate much enthusiasm and has been dropped from the line-up, though the similarly sized CT 200h has done significantly better.

The hybrid CT is the smallest model in the line-up and competes in the emerging U.S. market for small luxury cars. Yet even with new offerings coming from the likes of BMW, with its updated 1-Series, and the addition of the Mercedes-Benz A-Class, Templin said Lexus isn’t looking to downsize its line-up.  He questioned whether there’s real demand for such small luxury cars and argued that makers like BMW and Mercedes are simply being forced into those segments to meet increasingly stringent U.S. fuel economy standards.

“We don’t have to,” Templin said, noting that with the mainstream Toyota brand selling “millions” of small cars like the Corolla and Yaris, Lexus doesn’t have to stretch its own brand down-market.

Nonetheless, Templin acknowledged the traditional definition of luxury is rapidly changing.  For one thing, demand for high-line products like the LS – and such competitors as the Mercedes S-Class and BMW 7-Series – isn’t likely to keep pace with the overall growth in luxury car sales.

Complicating matters, the premium-luxury segment has seen a raft of new product entries, such as the Hyundai Equus, so the Lexus share isn’t likely to reach past levels.  As recently as 2007, it had a 37.8% share, according to Ward’s Automotive.  For the first seven months of 2012 that was down to 11.0%, though that should rebound somewhat with the upcoming launch of the new LS sedan – which will add several new versions including the F Sport.

Templin insisted it still makes sense to market a big car like the LS, though he acknowledged, “In the future, I think we’ll see multiple flagships in our line-up and (from) other manufacturers.”

That, he hinted, could include a supercar like the LFC — reportedly a personal favorite of Toyota Motor Co. President Akio Toyoda. The grandson of Toyota’s founder, Toyoda has been actively involved in the Lexus brand, Templin confirmed.

The Japanese executive personally came to the States to introduce a sportier version of the GS sedan in 2011 and “he’s had a huge influence” on the brand, pressing it to develop more passionate products, said Templin.

“He’s looking for us to change the way the company thinks,” added the Lexus general manager.