Bush Would “Do it Again” on Auto Bailouts 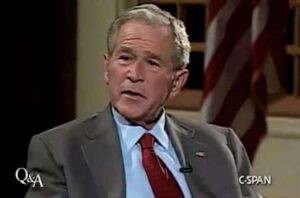 It has become one of the rare things that binds the two men, the controversial automotive bailout that was begun by former President George W. Bush and completed by his successor, President Barrack Obama.

The latter defended his actions during the recent state-of-the-union address, during which he declared “The U.S. auto industry is back.” His predecessor used a meeting of the nation’s auto dealers to defend his own actions, insisting he had no other choice but to completely sink the American economy.

“I’d do it again,” proclaimed Bush, speaking to the annual convention of the National Automobile Dealers Association.

The bailout, which ultimately totaled $85 billion, was originally begun during the waning days of the Bush Administration. With a specific rescue effort rejected by Congress, the former Commander-in-Chief decided to tap into a separate, $700 billion fund Capitol Hill did approve for the bailout of Wall Street and the banking industry.

“Sometimes circumstances get in the way of philosophy,” said the ex-President, during his speech in Las Vegas, referring to his normal stand in favor of free trade.  “If you make a bad decision, you ought to pay,” he said, referring to the collapse of both General Motors and Chrysler.

But Bush also noted that coming on top of the failure of Lehman Brothers, the meltdown of the banking industry and the collapse of the housing market, a painful shift in policy was needed.

“I didn’t want there to be 21% unemployment,” he stressed, echoing forecasts at the time that the loss of GM, Ford and the automotive lenders also covered by the bailout could lead to the loss of 1 million jobs.

The former President has kept a low-key profile since leaving office in January 2009 – though he did call the bailout “the only option” in his 2010 book, “Decision Points” — leaving his successor to field much of the criticism.

In that book, the 43rd President argued that, “The immediate bankruptcy of (Chrysler and GM) could cost more than a million jobs, decrease tax revenues by $150 billion and set back America’s Gross Domestic Product by hundreds of billions of dollars.”

Republican president candidate Mitt Romney is among those who have said they would have rejected a bailout.

“My view with regards to the bailout was that, whether it was by President Bush or by President Obama, it was the wrong way to go,” said Romney – whose father George once ran Detroit-based American Motors – during a GOP presidential debate last November.

In all, the Bush Administration provided $25 billion in emergency assistance, $13.4 billion going to GM, another $4 billion to Chrysler.  The Obama Administration added another $60 billion shortly after taking office.

Chrysler wrote off the money provided under Pres. Bush but last year paid back the loans the company received in 2009.  General Motors, meanwhile, has returned $23 billion to the Treasury, partly by repaying loans and also by selling off more than half the shares taxpayers held in the automaker.

The government still holds a 26% stake, however, and GM officials appear to be waiting for a stock market recovery before staging a second stock offering.  The maker’s shares plunged to less than $20 a share after the $33 price set during GM’s November 2011 IPO. The stock has rebounded recently, currently trading at just over $26 a share.  But to break even, the Treasury would need to get more than $50 a share on its remaining GM holdings.

Concluding his speech to the NADA convention, Bush said “I didn’t want to saddle my successor with an additional economic crisis,” drawing a standing ovation from the dealers, the trade group’s President Bill Brady describing the decision as “courageous.”