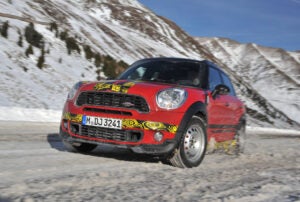 You’re likely to be halfway down the slopes by the time you can pronounce the full name of Mini’s newest – and fastest – crossover model, the Mini Countryman John Cooper Works.  Take our word for it, as we had our first chance to check out the Countryman JCW during a snow-covered preview in the Tyrolean Alps.

One of the semi-finalists for North American Truck of the Year, the Mini Countryman has generated more than its share of controversy since its 2010 debut.  No surprise: it’s not only the biggest offering ever from Mini and the first to fall into that gray space between car and truck, but it also was the first to offer all-wheel-drive – and four doors.

But buyers seem to be dismissing the debate and focusing on the Countryman’s blend of functionality and fun-to-drive dynamics– making it the brand’s new best-seller.  So, we wondered as we packed up our ski gear, what would happen when you pack in some more punch? 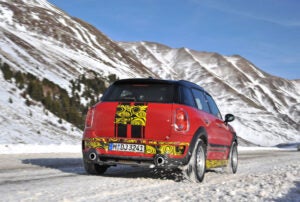 Expect as much as 15 hp more out of the JCW version of the Countryman.

According to Heinz Krusche, the executive responsible for chassis development of all models of the BMW Group, the Mini Countryman JCW’s 1.6-liter engine will get between 10 to 15 horsepower more than the base 211 hp model when it rolls into showrooms later this year. It will maintain the standard All4 all-wheel-drive found in the Countyrman Cooper S, however, so the JCW should be just as much fun to drive in the snow as off road.

Last week, we got the proof of the pudding at the Kühtai ski resort in the Tyrolean Alps. The pre-Christmas program started with an uphill drive of the diesel-powered Countryman Cooper D, which had no problems at all with a couple of inches snow on the track. But of course, we were eager to drive the John Cooper Works.

With only one prototype available Krusche was clearly cautious about handing over the keys and requested the chance to give us a ride before swapping seats. With the JCW sport suspension and 17-inch wheels it has nearly half an inch less ground clearance and was clearly eager to charge into and out of the sweeping corners and tight switchbacks we experienced on the on and off-road courses BMW laid out. 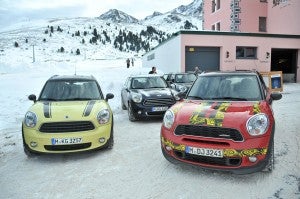 With 206 lb-ft of torque, you get an immediate response as you work the throttle, most of that power available by 1,850 RPMs.

Steering is direct and the overall feel will be familiar to those who’ve already experienced the nimble Mini Countryman.  The suspension has been tightened down, however, with Krusche revealing that the front stabilizers have been increased by 0.4 inches to 0.9 inches, while those in the rear will maintain the same 0.66-inch diameter as in the Cooper S. With 17-inch wheels and 5.5 inches of ground clearance it will be 1.5 in. higher than the Mini hatchback.

The sturdy all-wheel-drive is a cheaper version of BMW’s XDrive-system, but it is also smaller and less heavy and therefore well-suited for the Mini. Surprisingly the JCW felt more agile than the standard Countryman. It is mainly due to the Sport suspension, but the All4 also has an influence. In fact, the All4 features an add-on electro-magnetic rear differential, which under normal circumstances allows the Countryman to push power out of the front wheels. On slippery and icy roads the All4 acts quickly and almost imperceptibly as it begins to shift torque between axles.

Fun driving indeed, but expect to pay just under $35,000 for the fastest Mini – with the longest name.

Two days after our drive of the new 2013 Mini Countryman S John Cooper Works we had the good fortune to chat with Dr. Kay Segler, who will take over the reins at the Mini brand in April, after a stint of three years at the helm of BMW M GmbH.  He noted  that the John Cooper Works variants will become more of a sub-brand, going forward, though not exactly the equivalent of BMW’s vaunted M.

“Not every model, but selected ones will be offered as a JCW model,” explained Segler. “Contrary to the BMW M models, they are not especially developed, and therefore will not be as strong technically. But The JCWs will get the suspension, engine tuning and JCW body and trim details.”

He said that Mini is constantly looking for higher sales and building the JCW sub-brand is one of the measures. “But JCW-models will not be offered everywhere. For instance in India, homologation will cost around $30,000, so there is no business case for bringing it to the market there.”

The Mini Countryman Cooper S John Cooper Works will go on sale around June as a 2013 model.