Steve Jobs and the Lesson for Detroit

The indispensable man helped transform the car as much as the computer. 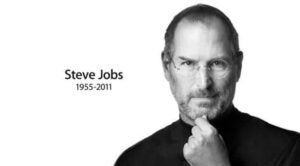 When he was once asked who he most admired, Steve Jobs pointed to Henry Ford and Walt Disney.  No surprise.  They both had the ability to give people what they wanted, often before they knew it.  And perhaps that was what we’ll remember Jobs for most, rather than any individual technological breakthrough.

Not that he didn’t have plenty of those, starting with the original Apple I computer and working up to the new iPhone 4S, released just days before the 56-year-old executive’s death after years of battling pancreatic cancer.

Jobs hadn’t even been born yet when the founder of IBM famously declared that there would likely be a market for no more than a handful of computers in the entire world.  Working out of his adopted parents’ garage with a high school chum, Steve Wozniak, Jobs set in motion a transformation that rivaled the one launched by Henry Ford.  Today, it’s difficult to find a household that doesn’t own several cars – or several computers, if you include desktops, laptops, tablets and smartphones.

Moreover, we have seen the grand integration of those two machines that changed the world.  As recently as the 1970s, when Jobs was just tinkering with his first primitive computer design, the typical automobile was a truly mechanical device.  The only electronics onboard could be found in those tinny transistor radios.  Today, however, the typical car contains thousands of dollars in silicon technology.  Microprocessors operate everything from the engine to the airbags.

No, Jobs wasn’t responsible for most of that.  Such technologies were already under development by the time he rolled out the original Apple I.  But he and his team played a significant role in the transformation of the driving experience as more and more buyers opt for high-end infotainment systems.

What car today doesn’t offer iPhone integration, the means by which countless motorists move their personal soundtracks from home to car.  When Mini recently introduced its Mini Connected feature, which lets it integrate a range of audio and other features into its cars it chose to develop the new technology specifically for the iPhone, with the even bigger-selling Android phones having to wait.

When Hyundai launched its new Equus premium luxury sedan it turned to the then-new iPad, using it to replace the time-tested print owners manual – and also allowing owners to schedule service directly through the tablet computer.

Both Chevrolet, with the Volt, and Ford, with the new Focus Electric, have developed iPhone apps that will let owners communicate with the battery cars through their iPhones – checking state of charge, for example, and setting the time to begin charging.

Such technologies alone might earn Steve Jobs a shot at minor immortality in the Automotive Hall of Fame.  But perhaps the most important thing he can offer the auto industry is more conceptual than technological: it’s the idea that truly great companies don’t just make great products; they make great products that consumers didn’t even know they needed.

Henry Ford instinctively understood that when he began work on his first car.  Back then, most folks were happy with horse and buggy, or perhaps train and trolley.  After all, at the turn of the 20th Century the average American hadn’t strayed much further than 25 miles from home.  Yet soon, we would become a nation on wheels.

Henry Ford forgot that lesson in later years, keeping his Model T around long after buyers told him they wanted something new.  But the company he founded showed it still had a visionary strain with the launch of the Sync infotainment system – developed in cooperation, it turns out, with Apple’s arch-rival Microsoft.  But by delivering something that consumers suddenly must have, Ford is again in a leadership role.  And, like Apple, it can smugly watch as the competition races to mimic the breakthrough.

Jobs, through the Mac, iPad, iPhone and Apple’s other products, gave us the ability to travel further still through the limitless virtual world.

He wasn’t an easy man to work with, mercurial, prone to fits of obscene rage, obsessed with secrecy.  But he also had his name written on something like 300 individual patents.  It’s said that no one should ever assume that they are indispensable. And it’s true that none of us, commoner or king, can outlast time.  If anything, our days are remarkably short.  Yet, with the passing of Steve Jobs that theory will be severely tested.