Those 19th Century Mad Men marketed the Winton. Has much really changed? 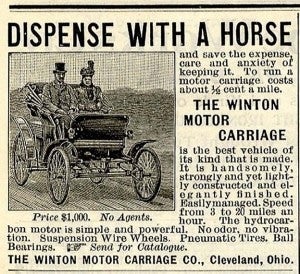 The first automotive ad, for a Winton, appeared on July 30, 1898 in Scientific American. Who knew what would follow once the Mad Men got into the game.

Hoist a very dry Martini before dinner Saturday to honor and toast the 19th Century Mad Men who convinced the Winton Motor Carriage Co. of Cleveland, Ohio to run the first automobile ad advertisement in Scientific American magazine, July 30, 1898.  Consider it an homage to those who led the way for us who make or have made our careers in auto advertising.

This is the ad that appeared.

No, the layout is not up to contemporary standards, the illustration is only so-so, but carefully read the headline and the body copy. Now think of this ad in terms of today’s advertising for electric vehicles. There’s an almost eerie visionary prophetic sameness with the major selling points, isn’t there?

Famous But Forgotten, from the Horseless Carriage Club, has noted, “March 24, 1898: The first American-built automobile is purchased by Robert Allison of Port Carbon, Pennsylvania – a coal mining town. The Winton horseless carriage was made by Scottish immigrant Alexander Winton. The Winton Bicycle Company incorporated in 1897 and began hand building cars, piece by piece. The body had painted sides. There were padded seats, a leather roof, gas lamps, and B. F. Goodrich Company-supplied rubber tires. Winton’s ad in Scientific American helped him sell 22 cars the first year.

James Ward Packard bought a car and liked it so much, he started his own company. Even with competition, Winton remained the top selling car manufacturer of 1899 when the company filled orders for more than 100 of the primitive horseless carriages. Not only was he making the car available, but to deliver the carriage, he designed and built the first car hauler. By 1901, publicity created an expanding market when two of the Vanderbilts purchased Winton cars. Unfortunately for the industry pioneer, that was the  same year his car lost a race to a young tinkerer and former farm boy Henry Ford.

In 1903, Horatio Nelson Jackson took 64 days to drive his Winton touring car from San Francisco to New York City, the first person to drive across the country. The car had to be hoisted over rocky terrain and mud holes. By 1904, Winton was producing cars with seating for five passengers at a list price of $2,500 (about $54,000 today). More and more companies began to compete for the new market and by 1924 Winton stopped building cars. He did continue to build engines until he sold the company to General Motors in 1930.

A total of 24,190 Winton’s were produced.  Wonder how many Leaf’s and Volts will be sold in the same 26 year period from introduction in 2010 to 2036. Or will they too be part of the famous and forgotten.  Ditto for the advertising.