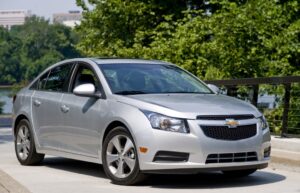 The 2012 Chevrolet Cruze is setting sales records for General Motors, a far cry from the unloved Cobalt it replaced.

When Chevrolet replaced its long-running Cavalier compact with the Cobalt, some pundits wondered if we just would have been better with yet another update of its ancient predecessor.

There are no such thoughts about the Cobalt’s replacement, the Cruze. The Cruze is so much better that in a few years when its successor is introduced, it is likely that it won’t have sullied its name so much that General Motors needs to come up with yet another moniker for its compact offering.

Fuel mileage has become a major point of emphasis for automakers everywhere and GM is crowing loudly that the Cruze can be ordered in Eco trim, which is rated at 42 mpg highway, the highest such rating for any gasoline-powered, nonhybrid sold in this country.

The Cruze tested here doesn’t carry that 42-mpg label, but it’s still impressive, scoring 26 city and 38 highway on the EPA tests. We saw 32 in a combination of freeway and rural two-lanes.

The Cruze’s interior is delightfully styled, especially when ordered with the optional two-tone leather.

But the Cruze is more than stellar fuel economy numbers. Where the Cobalt’s interior was bland and poorly built, Chevy has ratcheted up the style and added plenty of the latest features. GM upped the exterior style as well.

While Ford is enjoying some success by offering its new Focus in both hatchback and sedan body styles, Chevy has decided to leave its Cruze hatchback in Europe. 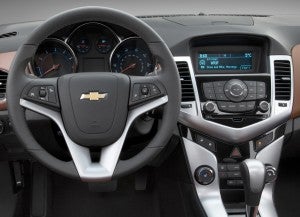 All Cruzes feature cool details such as shapely silver trim and deep-set gauges.

The Cruze drives better than the Cobalt, as well. Its European heritage shines through with good handling and a sporty ride. The suspension is very controlled, but the tradeoff is small bumps are felt somewhat sharply, particularly at lower speeds.

A pair of engines are offered. A 138-horsepower 1.8-liter four cylinder is standard in the base LS. Every other trim level, including Eco models, comes with a 1.4-liter turbocharged four cylinder, which, interestingly, produces the same horsepower as the bigger, naturally aspirated engine. Where they differ is in torque. The 1.8 produces 125 lb.-ft. at a somewhat lofty 3,800 rpm, while the turbo motor has 148 lb.-ft. at a low 1,850 rpm.

The Cruze has a sharp design, although not as striking as some of its newest competitors.

The 1.4 is quiet enough while cruising, but it gets buzzy when pushed.

The automatic, which has manumatic shifting via the shift lever, is quick to find the right gear, but shifts can be somewhat abrupt in certain circumstances.

The Cruze tracks well, but the steering cannot be described as sporty. 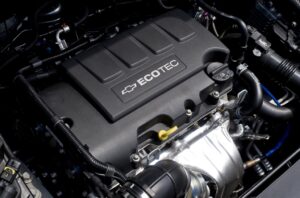 The Cruze’s optional turbocharged 1.4-liter four cylinder produces 138 horsepower, the same as the base 1.8-liter four.

The decision to offer two engines with exactly the same horsepower rating seems a bit strange and is sure to confuse buyers. Obviously, the 1.8 is offered so GM can keep the base price down. But couldn’t the engineers find even another two horses in the turbo motor, just to give it an even 140?

Speaking of base price, the Cruze’s is similar to its competitors, even though it comes with a lot of standard content. For $17,505, including shipping, the Cruze comes standard with six-speaker stereo with a CD player and XM radio and 10 airbags. Of course, anti-lock brakes and stability control with traction control are also standard.

This 2LT trim level, starting at $21,355, comes standard with leather, 17-inch alloy wheels, Bluetooth and four-wheel disc brakes (lesser models come with rear drums). The automatic transmission adds $1,185, navigation with a 7-inch touchscreen is $995 and premium audio is $445, bringing the total price to $23,980.

As has become the norm across virtually the entire automotive industry, the interior is beautifully styled. The sculpted dashboard and center console have a cohesive, eye-pleasing design. The well-equipped test car’s navigation system adds significantly to the center console’s button count. Unfortunately, some of those buttons have little use. An example is the eight-way button panel that can be used to move around the navigation screen, but, frustratingly, seems to do nothing in other functions.

But the biggest criticism is that the interior simply feels too small. While Chevrolet says that the Cruze’s 95 cubic feet of passenger space beats some of its competitors, it simply doesn’t feel that big. The Cruze’s steeply raked windshield and rear window mean entry to the front seats is difficult for taller folks. Once there, it doesn’t feel spacious.

Storage space in the center console is also lacking. There’s a tiny space under the armrest, a hole that works well for a cellphone between the cupholders and gearshift and another small cubby in front of the gearshift, but altogether, it doesn’t amount to much space.

But the biggest interior demerit is the rear seats. While the test car’s leather interior’s beautiful trimmings continue to the back seat, there just isn’t enough space back there.

This is a familiar problem for many of GM’s smaller cars. GM seems to favor trunk space – the Cruze has a generous 15 cubic feet – over rear-seat space. Seems like a poor trade-off. The Cobalt made the same mistake.

With the driver’s seat set for me – 5-foot-10 with stubby legs – getting a pair of size 11 loafers into the foot wells was difficult. Once seated, knees were wedged against the front seatback. Not surprisingly with the sporty roofline, headroom was lacking as well. Maybe the biggest surprise of all is that the Chevrolet consumer website calls the Cruze’s interior “cavernous.” Sure, if you count the useless space at the base of the steeply raked windshield.

If the Cruze is on your shopping list and you expect adults to inhabit the rear seats, make sure you sit back there before signing on the dotted line. A Hyundai Elantra, for example, has more rear-seat space.

The tight back seat is an unfortunate problem for the Cruze because otherwise, this is a fine little sedan.