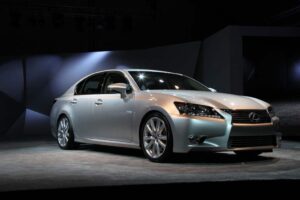 The 2013 Lexus GS ushers in some big changes for Toyota's luxury brand.

It’s been a tough year for Lexus, Toyota’s luxury brand slipping behind BMW in the U.S. sales sweepstakes.  Part of the problem has been the aftermath of the March 11 earthquake and tsunami that crippled the Japanese auto industry, but industry observers also warn that potential buyers may be shifting to other luxury brands in search of more passionate products.

With that in mind, Lexus is out to reinvent itself, declared Akio Toyoda, the CEO of Toyota Motor Co., during a speech in Pebble Beach, California Thursday night.  The executive’s relatively rare American appearance underscored the importance of the 2013 Lexus GS sedan which was given a splashy preview during the lead-up to the weekend’s annual Concours d’Elegance.

“This is the first car to wear the new face of Lexus,” the executive, the grandson of Toyota’s founder, proclaimed.  But the new sedan is more than just a new styling exercise, Toyoda added.  It is the result of an intensive effort designed to get more in touch with the brand’s customers and, as such, “Lexus is leading the way in how the entire Toyota Motor Company should operate.” 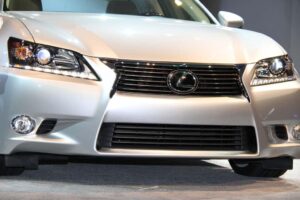 The "new face" of Lexus.

First previewed in concept form at the New York Auto Show, last April, the 2013 Lexus GS has a decidedly Japanese appearance, but is nonetheless more sporty and stylish than the often bland Lexus designs of the last two decades.

The highly controversial front end of the New York concept was revised, adopting a new “spindle grille” framed by hockey stick-shaped LCD running lamps.  The overall shape of the car is more angular and distinctive, as well. 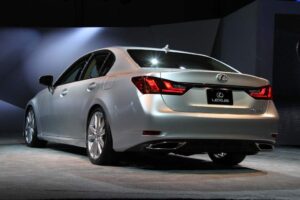 While it will be months before the reviewers get to ride in a production version of the 2013 sedan, Lexus officials note they have adopted a more performance-oriented suspension, and point to the new 306-horsepower version of their 3.5-liter V6 which is one of the most powerful engines in the midsize luxury segment.  It will be able to launch the car from 0 to 60 in just 5.7 seconds.

But it also is expected to deliver improved fuel economy due to some creative engineering.  Among other things, the GS’s V-6 uses a unique dual port plus direct fuel injection system. 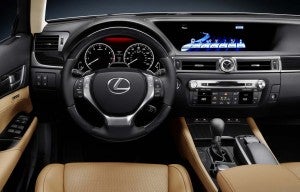 The 12.3-inch LCD screen is larger than an Apple iPad's display.

Motorists will be able to adjust the car in any number of ways, depending on whether they’re seeking a sporty, comfortable or high-mileage ride.

Lexus has long put an emphasis on fuel efficiency, in fact, and the GS was the first to offer a hybrid drivetrain option that attempted to balance performance and mileage.  A new hybrid version will be revealed at the upcoming Los Angeles Auto Show, while a promised F-Sport edition will take center stage at the annual SEMA aftermarket show in Las Vegas, a month later.

The new GS puts a premium on safety, as well, Templin noting it features 10 airbags, infrared night vision that can spot a pedestrian or deer on a dark road, and even a new camera system designed to spot when a driver is growing drowsy and then alert them to take a break. 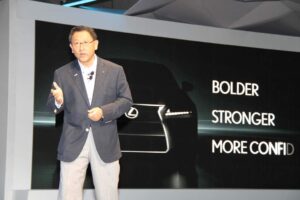 While Lexus may be changing the way it operates, with an increased degree of independence from parent Toyota, some things won’t change – like the brand’s focus on technology.  One of the first things a potential customer will spot during a visit to the showroom will be the absolutely massive 12.3-inch LCD screen mounted on the dash – the image bigger than that on an iPad.  It will be the largest in the industry, and allow multiple functions to be displayed simultaneously.

(Some observers at the Lexus GS preview questioned whether the size and split-screen function might actually raise the prospect of creating a new driver distraction, however.)

Customers will have plenty of other digital creature comforts including an optional 835-watt Mark Levinson audio system with 17 speakers.

The voice-control system is now designed to recognize conventional speech rather than requiring users to memorize complex commands.  And the system will provide access to a variety of smartphone functions, including Pandora Radio, Yelp, Open Table and even Facebook.

Lexus is hoping that with the launch of the new GS it will be able to create an aura of passion about the brand that will draw in buyers looking at European marques like BMW.  But it also is betting that by offering an array of features like the big screen and 835-watt audio package it will continue to win over its traditional buyers, folks who want comfort and convenience and aren’t as interested in getting the ultimate driving machine.