No Spit, Saliva Tests Show Driving Really Does Stress You Out

Want to relax while commuting -- or on your Memorial Day adventure? Try singing. 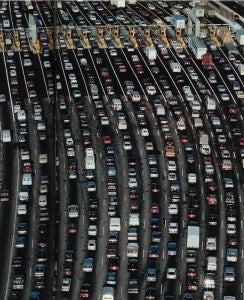 It could be anywhere, these days.

Americans will log literally billions of miles on the highway over the long Memorial Day weekend.  And while we may like to think about open road adventures, the traditional start of the summer season is just as likely to bring endless traffic jams as millions of motorists cram onto the roads heading for the same ocean shores, theme parks and lake-front cottages.

The fact is, we live in our cars for play and for work, the typical commuter traveling about 148 miles a week, according to Experian Automotive – though that’s actually down a bit from five years ago, reflecting the impact of unemployment perhaps more than anything else.

Whether you’re heading out for a vacation or just to the office, independent research reveals that driving really is hazardous to your health – even if you never get into an accident.  The big problem is stress, reveals a worldwide study commissioned by TomTom, one of the major navigation system manufacturers.  But the study also reveals some creative ways motorists have come up with to reduce stress levels.

Researchers measured stress levels by looking for physiological markers in participants’ saliva.  They found that women experienced an 8.7% increase in stress while driving in traffic.  But for men, stress levels soared by 60%.  Curiously, half of all men and two-thirds of the women involved in the study insisted that they didn’t feel stressed after spending 20 minutes in traffic.

“Men, in particular, show a strong acute physiological ‘fight or flight’ response. The fact that they are not always aware of this could indicate that driving regularly in dense traffic could have a profound effect on their health,” said David Moxon, the health psychologist who oversaw the research.

The number of cars on the road is increasing rapidly, more than 70 million or so vehicles rolling off assembly lines around the world each year.  While London, Paris, Los Angeles and New York might have a history of traffic snarls, the problem is spreading everywhere, from Beijing to Bombay, with 86% of the drivers surveyed by TomTom admitting they feel negatively impacted by traffic.

No wonder that researcher found that U.S. motorists, in particular, would rather be just about anywhere but stuck in traffic.  A full 75% said they’d rather go to the dentist, while 92% would rather be meeting their in-laws for the first time.

So, what to do during the morning commute?  That depends, to some degree on where you live and what gender you are.  Listening to music is a favorite coping mechanism for 82% of drivers, while 21% pass the time by talking to their passengers.  Americans and Swedes tend to talk on the cellphone, while the Dutch tend to snack.

English speakers, in particular, have a fondness for singing – though it’s not clear whether that works just for the driver while raising passenger stress levels.  Researchers noted that singing actually does seem to work, especially for women, two out of three showing a measurable reduction in traffic-related stress.