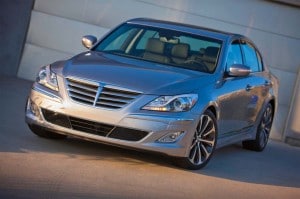 The big changes with the 2012 Hyundai Genesis can be found under the hood.

Hyundai is ready to let buyers slip into the newly-updated 2012 Genesis sedan, and despite some significant upgrades and changes, it’s carrying a barely 1% price increase, at $34,200 – before delivery charges.

The 2012 model-year brings the first significant update of the Genesis sedan since it was named North American Car of the Year, a few years back.

But the big news is on the powertrain front, the new ’12 Genesis continuing to offer both the 3.8-liter and 4.6-liter engines found in the original car, but also introducing a new 5.0-liter direct-injection V8 shared with the even more luxurious Hyundai Equus sedan.

Exterior changes for the new model-year are relatively modest, with Hyundai introducing an “enhanced” grille, larger air intakes and modified headlamps that adopt the now-required LED accent lights.  There are new puddle lamps in the mirrors, revised rockers and redesigned taillights, as well as new asymmetrical exhaust tips.

The suspension has been tweaked on all models, with larger rear stability bars added to reduce body roll.  Brakes have been upgraded, a Lane Departure Warning System and Daytime Running Lamps added.  But the big news is that new 5.0-liter V8 – and the addition of an all-new 8-speed gearbox that becomes standard across the Genesis line-up.

The long-anticipated Tau engine is now the aspirational powerplant of choice for Hyundai luxury buyers.  It makes an impressive 429 horsepower and 376 lb-ft of torque, yet paired with the new automatic transmission still delivers 16 mpg City, 25 Highway, according to the EPA.

The R-Spec will be offered with a variety of features available on the top-line model, including special 19-inch wheels and tires, and a sportier suspension tuning.  It will be marketed at $46,500, plus $850 destination.