Why Daimler Dumped Penske Over Smart

But after years of dithering, can the Germans do better at selling microcars to Americans? 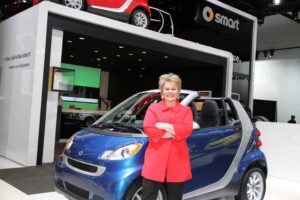 Roger Penske and his team - including Smart boss Jill Lajdziak - appear to have been blindsided by Daimler's announcement about the brand's future.

After dithering for years over the future of Smart, Daimler AG is about to take a make-it-or-break it gamble on the long-struggling brand.

In a surprise move, the German maker – which also builds the high-line Mercedes-Benz brand, announced it would pull Smart’s U.S. distribution operations away from the Detroit-based Penske Auto Group and operate the American franchise on its own.  Penske had been given the distributorship, in 2008, after years of delay by Daimler, which wasn’t sure how to sell small cars in a market that normally equates bigger with better.

Roger Penske, chairman of the eponymous Penske Auto Group and one of the most respected figures in the U.S auto industry, says the German automaker’s decision to cancel its distribution agreement with PAG was shaped by a desire to integrate Smart more closely into the Mercedes-Benz marketing organization.

“Going forward, Smart is seen as an integral part of the Mercedes-Benz network,” Penske said, adding Mercedes-Benz also needs the efficiency credits generated by Smart to meet future fuel-economy standards in both Europe and North America.

The fuel economy standards on both continents and China will undergo dramatic revisions by the middle of the decade.  Operating without high-mileage Smart would make it difficult for Mercedes to get to the 2016 target of 35.5 mpg, some analysts fear.  And the possibility of bumping that to 62 mpg by 2025 is under study by the Obama Administration.

In addition, Smart needs a major investment in advertising and marketing in the U.S., which goes beyond anything PAG and its independent Smart USA organization could afford on its own.

Thus, Mercedes-Benz is preparing a major advertising and marketing effort to build up the Smart brand in the U.S.  Daimler originally had elected to use an independent distributor to spread the risk and the cost of introducing the Smart cars into the U.S. market where small cars  traditionally have been a tough sell.

Penske’s PAG, one of the largest U.S. automotive retailers, has kept a tight grip on advertising spending and apparently generated some complaints from Germany that the Smart USA’s slender marketing budget contributed to the slide in sales in the U.S. over the past two years.  The brand is currently selling at barely a quarter of the rate it peaked at, during the 2008 launch year.

The lack of new product, however, also contributed to the slide in Smart sales.  The Smart USA organization asked for additional Smart electric vehicles but was limited to only 250 units.

Penske attempted to circumvent the lack of new product by contracting with Nissan for a unique five-door vehicle, which was to be sold only by Smart USA’s 70 dealers.

PAG had already sunk $10.5 million into designing the new vehicle, Penske said.  But the project was abruptly canceled, this week, as Daimler announced plans to take over Smart distribution.

Nevertheless, Penske’s decision to spend money on the project indicates the final decision to put Smart USA under German control was rather abrupt.  Daimler CEO Dieter Zetsche, during a visit to Detroit in January, indicated he was aware of the PAG project, adding the final design would have to meet Smart’s design standards.

At the recent Chicago Auto Show, Penske’s top executive for Smart, former Saturn boss Jill Lajdziak, spoke positively about the future of the small car brand, giving no indication a shake-up in the distribution agreement was under consideration.

Indeed, analysts wonder whether Penske himself was blindsided by the news.  The former auto racer himself had traveled to Washington D.C., just days before, to personally deliver the first electric Smart to a retail customer. The press release about the sale of the electric Smart offered no hints that Mercedes-Benz was going to take over responsibility for distribution of the Smart vehicles in the U.S.