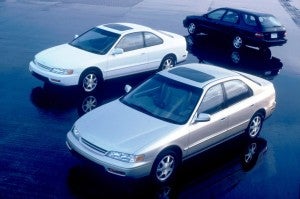 Keeping the chop shops in business are older, but popular models.

The FBI’s just-released 2009 Uniform Crime Report shows that vehicle theft is once again down significantly in 2009, the sixth consecutive year of reductions.  In 2008, 956,846 vehicles were reported stolen – the lowest annual total in more than 20 years. For 2009 the thefts are lower at 794,616.

Using this FBI data, the National Insurance Crime Bureau (NICB) has just released its list of the Top Ten stolen vehicles in the United States by make, model, and year.  Honda Accord and Civic, Toyota Camry and the Ford F-150 head the list.

Unlike other theft reports, this one covers all vehicles, not just insured ones. That’s a significant difference in the data base since newer, more expensive and insured vehicles are often stolen to be resold with counterfeit vehicle identification numbers or shipped out of the country across our porous borders.  (See Vehicles Thieves Love to See – and Take) Older cars are often chopped up for parts, leaving their less affluent owners out of luck.

“Through the end of August this year there were 97,655 vehicles that were listed as stolen and not yet recovered,” said Joe Wehrle, NICB president and CEO. “Of that number, only 38% had some kind of insurance coverage. So there are a lot of vehicles out there that are being stolen and the owner is left holding the bag with no car and no money to buy another one.

NICB suggests motorists use its “layered approach” to auto theft prevention.  By employing these  low-cost suggestions, people can make their vehicles less attractive to thieves:

1.      Common Sense: Lock your car and take your keys. Many thefts occur because owners make it easy for thieves to steal their cars.

2.      Warning Device: Having and using a visible or audible warning device is another item that can ensure that your car remains where you left it.

3.      Immobilizing Device: Generally speaking, if your vehicle can’t be started, it can’t be stolen. “Kill” switches, fuel cut-offs and smart keys are among the devices which are extremely effective.

4.      Tracking Device: A tracking device emits a signal to the police or to a monitoring station when the vehicle is stolen. Tracking devices are very effective in helping authorities recover stolen vehicles.  Some systems employ “telematics” which combine GPS and wireless technologies to allow remote monitoring of a vehicle.  If the vehicle is moved the system will alert the owner and the vehicle can be tracked via computer.

The no-profit and insurance industry supported NICB has a partnership program in place so you can receive a discount on proven theft prevention and recovery products. Go to www.nicb.org for more information.

Another valuable is NICB service is VINCheckSM, a free vehicle history service for consumers considering a used car – www.nicb.org/theft_and_fraud_awareness/vincheck/vincheck.