New look for the original coupe-like sedan – without camo! 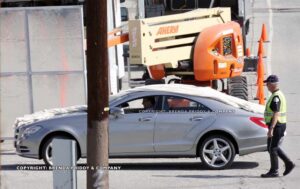 The first good look at the 2012 Mercedes-Benz CLS, the original coupe-like sedan.

We’ve been seeing next-generation CLS prototypes with lots of camo for some time now. Today, we’ve caught the 2012 CLS on a photo shoot wearing almost no disguise at all!

From our photos, it quickly becomes apparent the CLS is in for quite a change. The front end is much more angular and aggressive. We’ve also realized that, when looking at camouflaged prototypes from earlier in the year, CLS prototypes were wearing an extensive front clip that was completely fake!

Towards the back, the CLS is getting significantly bigger fender flares, giving the Mercedes hips that look almost Bentley-like. A much flashier pair of tailights are easy to see as well. 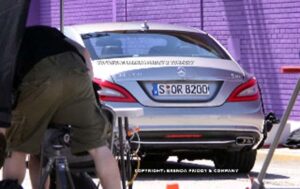 The original Mercedes-Benz CLS strongly influenced automotive design, generating an assortment of followers, from the Volkswagen CC to the new 2012 Jaguar XJ.

Motivation for this new CLS is expected to come from a wide range of gas and diesel motors, as well as a BlueHybrid model that will use the same engine system as the S400 BlueHybrid. This particular model in our spy photos is the CLS 350 CGI.

Watch for the official debut this fall at the Paris Motor Show.