From truck to crossover. 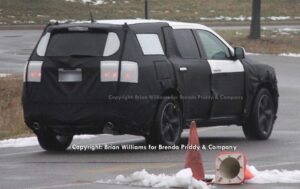 This spy shot tells only part of the story about the next-gen Dodge Durango - or whatever it'll be called.

Today we’ve caught another sign of new life at Chrysler with these first photos of a 2012 Dodge Durango prototype.

Code-named “WD,” the replacement for the current, truck-based Dodge Durango will be sharing a more car-like unibody chassis with the 2011 Jeep Grand Cherokee and the 2011 Mercedes ML class. Not all things will be equal as we expect the Benz to sport higher-end running gear than its Chrysler brothers. Fiat may also launch a vehicle on this chassis sometime in 2012-2013. One thing you WON’T see on this chassis is a Chrysler Aspen variant.

(And, yes, we did say Mercedes ML.  The next Durango will be one of the last Chrysler products to bear the heavy Teutonic imprint of Chrysler’s failed marriage to Daimler AG.)

While the Durango nameplate has been in use since 1998, that may change with this newest iteration. Notably, during Chrysler’s marathon presentation of its new 5-year plan, in November, the word “Durango” was never spoken. In the PowerPoint presentation, it was referred to simply as “Full-size CUV.” We’ll leave it to you to guess which town in the Western United States Dodge may name its new CUV after.

Powertrains for the Dodge should be identical to the 2011 Jeep Grand Cherokee, with the next-gen Pentastar 3.6-liter V6 and the 5.7-liter Hemi V8 on tap. A Fiat-sourced diesel motor, as well as a dual-clutch electrically-shifted manual transmission, may eventually find their way into the Dodge. Other features we expect to see are optional third-row seating, power liftgate, adaptive cruise control and parking sensors.

Watch for this new Dodge CUV to start production at the end of 2010 at the Jefferson North Assembly Plant in Detroit, MI.  Sales won’t start until sometime early in 2011, however, and to add to the numeric confusion, the “Full-size CUV,” whatever it’s eventually dubbed, will carry a 2012 model-year designation.