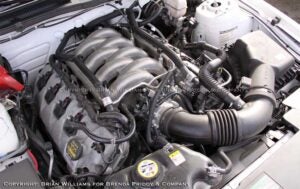 First, let me clearly state, these pictures were taken in a public area and at no time did my shooter handle or touch any part of the vehicle. The engineers testing this prototype did not assist with the taking of these images, nor were they even aware that photos were being taken!

We just caught the very first proof of Ford’s all-new 5.0-liter V8. Code-named “Coyote”, the 5.0-liter, four-valve, naturally aspired V8 will be offered in the 2011 Mustang, as well as the F150. We’re estimating 400-horsepower, and 400 pounds-feet of torque, with the fuel economy close to that of today’s 5.4-liter engine.