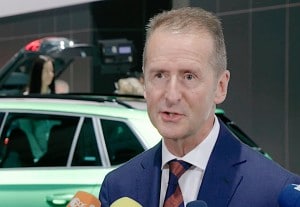 Volkswagen AG easily beat back a challenge from dissident shareholders, revealed additional details of a broad switch to electric vehicles and the efforts to become carbon neutral by the middle of the century.

“In a nutshell: the outlook for the Volkswagen Group is good. Our core product – the automobile – remains a key economic and technological pacesetter. It continues to create innovation, growth and prosperity in many regions of the world. And it keeps society mobile,” Diess said.

Diess said acknowledged the “diesel crisis” continued to haunt the company during 2018. “It is and will remain a major watershed. So far, we have spent some 30 billion euros dealing with its aftermath. Yet the crisis also marked the start of our group’s fundamental realignment – in terms of technology, personnel and culture,” he added.

Diess said Volkswagen intended to apply the company’s “modular toolkit principle” to the world of electrification with the MEB.

VW has already begun taking order for Volkswagen ID.3 EV, which will be the first vehicle to start being produced on this new platform this year. “It will be followed in quick succession by models from the Audi, Skoda and Seat brands. We are planning a total of 15 MEB models Group-wide in the first wave up to 2022,” said Diess, who also predicted that Volkswagen will soon be building more EVs than Tesla. 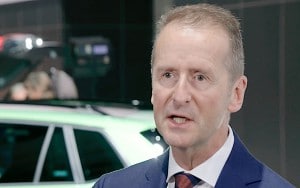 Diess said the company planned to reduce its carbon dioxide emissions to zero by 2050.

The possible applications range from compact cars and large sedans through to electrically powered camper vans.

Diess added, “Emotional small-series vehicles are also conceivable. The more cars that are manufactured using the MEB, the cheaper they become. That is why we are also opening up this platform to third parties.”

Volkswagen also is pushing ahead with e-mobility.

“It is by far the most efficient way to achieve decarbonization and the fleet-wide carbon dioxide targets – also for you as shareholders. 2019 will be a key year in our Group-wide electrification offensive. The car must become clean, so as to make sure that individual mobility remains possible for as many people as possible.

“We are at a turning point: climate change is the key challenge facing mankind. If we do not cut carbon dioxide emissions significantly, the consequence for coming generations will be devastating. As the world’s largest car maker, we have a particular obligation in this regard.

Some 14% of carbon dioxide emissions worldwide stem from the transport sector. This includes airplanes and ships as well as passenger cars and trucks. The vehicles from our passenger car brands alone are responsible for 1% of global carbon dioxide emissions. We aim to bring that 1% down to 0 by 2050. We are committed to the targets set under the Paris agreement,” he said.

Diess also acknowledged the automotive market in China declined for the first time in two decades in 2018.

“All the same, we notched up a new delivery record with our joint venture partners. We have now increased our market share to 18.5%, so we are the market leader by a long way,” he said. 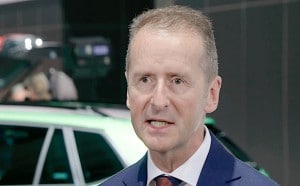 Diess told shareholders that the company is poised to meet its electric vehicle goals.

“We anticipate a pickup from the second half of the year onward as a result of the value-added tax cut and our model offensive,” he said. Volkswagen is planning to double its range of SUV models, which are particularly important in China, by 2020, while locally made e-vehicles will help boost unit sales.

Volkswagen also is planning an IPO of Traton, its commercial truck business built around the Man and Scania brands.

“Traton is on course to become a global champion,” he said. “We will continue to pursue our plans for an IPO systematically. Backed by approval from the Supervisory Board, the Board of Management resolved yesterday to go ahead with the planned IPO before the 2019 summer break in August, pending market developments.

Back in March, Volkswagen halted the truck IPO management while waited for market conditions to improve. “As the market leader for trucks in Europe and Brazil, Traton has been able to win further market share,” Diess said at the annual meeting.

Volkswagen influential unions backed a restructuring of the world’s largest carmaker after Diess announced plans to spend 1 billion euros on a new battery cell production plant near its headquarters in Wolfsburg.

Observers said Diess needed the support of Volkswagen’s unions as he attempts to slim down its structure. At the same, the company easily beat back “countermotions,” calling for outsider to replace a number of members of the company’s board of supervisors.

In their motion, the dissidents, most groups representing smaller investors, complained that Volkswagen has not been transparent enough during the diesel crisis and still has not disclosed the estimates of the costs, including the estimated price of future legal settlements, to shareholders.