Duties will quickly grow from 5 to 25%; “auto industry gets hammered,” as prices soar

President Donald Trump surprised Mexico by slapping a new tariff on the country in an attempt to slow illegal immigration.

“The Tariff will gradually increase until the Illegal Immigration problem is remedied, at which time the Tariffs will be removed,” Trump said via Twitter, with the new duties to start at 5% and increase to 25% if there isn’t a resolution to the immigration situation by Oct. 1.

The move will impact a broad range of goods, including consumer electronics and, in particular, the autos and automotive parts that make up the single biggest Mexican export to the U.S. last year, according to the U.S. Census Bureau, comprising a total of $99.3 billion. As with imports on Chinese goods caught up in another trade war, automakers could choose to pass the added costs on to consumers at a time when vehicle prices roughly at record levels and sales are in a slump.

Mexico has, during the past decade, become one of the world’s largest producers of automobiles, the country benefiting from extensive free trade agreements, as well as its pool of inexpensive labor. It now houses dozens of assembly and parts plants, such as the recently opened Audi plant in Puebla that serves as the global source for the latest-generation Q5 SUV, and the huge Nissan complex in Aguascalientes. 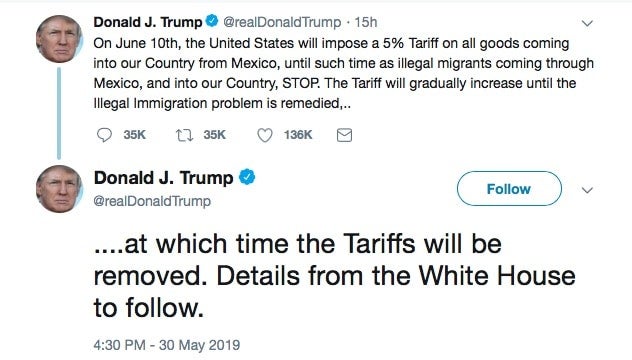 Trump sprung a new tariff on Mexico, announcing it on Twitter.

Nissan sourced about a third of the vehicles it sold in the U.S. last year from its two Mexican factory complexes. And assembly operations in that country serve as major sources for nearly a dozen other automakers.

Fiat Chrysler Automobiles sources some of its Ram pickups from its own Mexican operations, the Ram 1500 being one of the automaker’s best-selling and most profitable model lines.

One of those trucks could see a major increase in cost should the tariffs go in effect next month and continue to ramp up through October. A typical Ram costing $40,000 in the U.S. would be tariffed at around $30,000 FOB as it begins the journey to a U.S. dealer. As of June 10, that would add an extra $1,500 to the cost for FCA. By October, however, that tariff would quadruple, to $7,500.

New vehicle prices have been steadily rising over the past few years and, according to data from LMC Automotive, will average $33,457 for May. That’s up 4% from a year ago and within dollars of the all-time record.

Even at 5%, the added tariff “potentially could scrub the deal, especially for marginal buyers,” said analyst Phillippi. And, the higher the tariff grows, “You’ll see an increasing number of buyers who will say they don’t want to buy this, or they will trade down.”

Even vehicles assembled in the United States would face price increases, industry experts point out, because most use at least some Mexican-made parts and components. The country now produces about 70% of the wiring harnesses used on American assembly lines, for one example. 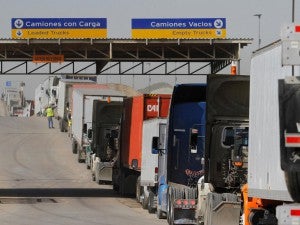 Just weeks after settling the details of the USMCA, including no tariffs, Trump implemented a tariff on Mexico.

Automakers could choose to absorb some or all of the added tariffs but, at a time when they are already feeling increased financial pressures – from, among other things, Trump’s tariffs on imported aluminum and steel and on Chinese-made goods – will find it harder to do that than in the past.

Complicating matters, the auto industry has already been in a slump this year, sales for May expected to dip about 2.1%, LMC estimates.

Higher prices had helped offset the ongoing slide, said Thomas King, senior vice president of the data and analytics division at J.D. Power. But experts warn there is a limit to the price elasticity of the market and the sort of increases that could follow from the new tariffs could stretch beyond what car buyers are willing – or able – to spend.

“While we appreciate the administration’s efforts to modernize U.S. trade agreements, including the United States-Mexico-Canada Agreement, our position on tariffs remains unchanged: they are a tax on our customers, which means they’re harmful to our nation’s economy and the millions of American jobs that depend on cross-border trade,” said Dave Schwietert, interim president and CEO, Alliance of Automotive Manufacturers.

“The auto sector – and the 10 million jobs it supports – relies upon the North American supply chain and cross border commerce to remain globally competitive. This is especially true with auto parts which can cross the U.S. border multiple times before final assembly.

“Any barrier to the flow of commerce across the U.S.-Mexico border will have a cascading effect – harming U.S. consumers, threatening American jobs and investment, and curtailing the economic progress that the administration is working to reignite as efforts are underway to pave the way for ratification of the agreement in Mexico, Canada and the U.S. Congress.”

But there was a quick reaction elsewhere. Among those criticizing the move was U.S. Senate Finance Committee Chairman Chuck Grassley of Iowa, who said in a statement that, “Trade policy and border security are separate issues. This is a misuse of presidential tariff authority and counter to congressional intent.”

According to Grassley, the new tariffs “would seriously jeopardize the USMCA, the proposed replacement for the North American Free Trade Agreement now facing challenges on Capitol Hill. That measure would have helped return some automotive production to the U.S. and also boosted wages for some Mexican workers.

(Tariff talk put on hold for six months by Trump administration. Click Here for the story.)

The new tariff proposal announced by the president comes just two weeks after Trump decided to delay a decision on whether to enact new duties of up to 25% on imported vehicles and automotive parts, following up on a Commerce Department study that declared them a threat to national security. The president now has until November to decide whether to enact those tariffs or reject the study’s findings.