Facility will divert 100,000 tons of plastic from landfills annually. 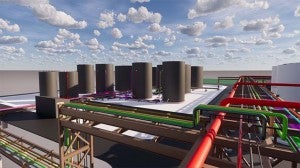 A rendering of the Brightmark Energy plastics-to-fuel plant going up in Ashley, Indiana.

Nearly 30 million tons of plastic produced in the U.S. each year winds up in landfills, with plenty of waste also washing out to sea where vast areas of the ocean are now covered with plastic trash. But a new plant in Northeast Indiana aims to help address that problem.

Brightmark Energy is today breaking ground on what is billed as the first commercial-scale plastics-to-fuel facility in the town of Ashley, about a three hour drive from Chicago. Once it gets up to speed, the plant will be able to process 100,000 tons of plastic waste, much of it traditionally non-recyclable, transforming it into diesel, naptha and commercial-grade wax.

“This sustainable technology directly addresses an acute problem facing our nation,” said Bob Powell, CEO of San Francisco-based Brightmark Energy, noting that 91% of the 33 million tons of plastic produced in the U.S. each year is not recycled.

“These products end up sitting in landfills for thousands of years or littering our communities and waterways,” Powell added in a statement announcing the groundbreaking. “This technology offers a tremendous opportunity to combat a major environmental ill and create positive economic value in the process.” 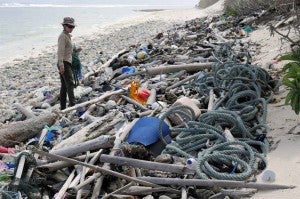 Researchers estimated there are 414 million pieces of plastic waste (along with plenty of other forms of trash) washed up on the remote Keeling Islands. Photo courtesy: Silke Stuckenbrock

Plastic waste has become an endemic problem. Not only are landfills overflowing with the material, but vast areas of the oceans are covered with it. Earlier this week, Jennifer Lavers, a researcher with the University of Tasmania’s Institute for Marine and Antarctic Studies reported that during a trip to the remote Keeling Islands, 1,300 miles off the coast of Australia, her team discovered an estimated 414 million pieces of plastic waste, including straws, shoes and toothbrushes.

There are efforts underway to reduce the use of plastic. In California, plastic straws are no longer automatically dispensed at restaurants, for example. Volvo has announced plans to eliminate single-use plastics everywhere from its plants and cafeterias to the vehicles it produces, where plastic film is traditionally used as protection during shipments.

Few expect plastics to disappear, however. The material is far too ubiquitous and efforts to find sustainable alternatives, such as compostable utensils, are far too limited.

The Brightmark plant could provide an alternative, backers claim. Significantly, the company’s conversion process allows it to work with plastics that traditionally cannot be readily recycled, such as plastic film, styrofoam and toys. 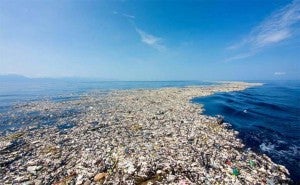 An estimated 8 million tons of plastic waste flow into the oceans each year, much of that winding up in garbage patches like this one in the Pacific.

The 112,000 square foot Ashley plant – which will employ 136 full-time employees – aims to process 100,000 tons of plastic waste delivered from across the Midwest, the company said. It expects to convert that to 18 million gallons of ultra-low sulfur diesel and naptha blend stocks each year, as well as nearly six million gallons of commercial grade wax. British-based BP plans to buy the fuels, with the waxes earmarked AM WAX.

“Ultimately, the outputs of this technology could also be used to produce the feedstocks necessary for manufacturing plastic again, thus creating the world’s first truly circular economy technology for plastics,” Brightmark said in its statement.

Part of the funding for the Ashley facility came from a $260 million financing package that included $185 million in Indiana green bonds. Brightmark has become the controlling owner of RES Polyflow, the Ohio company that developed the plastics conversion process.

“Brightmark plans to develop dozens of additional plastics-to-fuel facilities across the United States, said Jay Schabel, the president of the company’s plastics division.