Toyota’s Ready to Hoop It Up 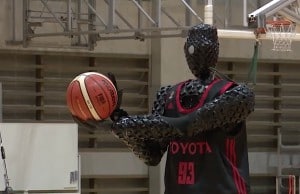 Toyota's Cue 3 robot hit five of eight from three-point range during a demonstration in Tokyo.

With today’s NBA centers being more mobile and getting farther away from the basket, Toyota may have developed the center of the future for “The League.” A 6-foot, 10-inch beast that almost never misses a free throw and shoots 3-pointers at 75% clip.

The downside is that it can’t dunk or even dribble: it’s a robot named Cue 3. The company rolled out its latest piece of technology in Tokyo to help promote the summer Olympics coming to the city in 2020. During the demonstrating it made five out of eight three pointers, which the company’s engineers say is worse than normal.

Cue 3 computes a three-dimensional image where the basket is and using sensors on its torso adjusts motors inside its arm and knees to set up the perfect form for basket after basket after basket. While it can drain threes all night, defensively, it’s lacking.

Yudai Baba, a basketball player likely representing host Japan at the 2020 Tokyo Olympics, took part in the demonstration and told the Associated Press if robot could learn a few more tricks, Cue 3 would be a welcome addition to his team.

“We human players are still better for now,” he said. An earlier version of the robot made free throws. 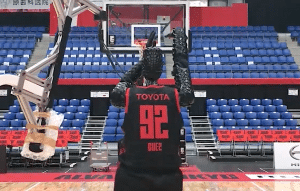 Cue 3 exhibits good form with the follow through on his three-point shot Monday.

Toyota and other automakers have produced a variety of robots during the past decade or so that mimicked the abilities of humans in variety of fronts from running to dancing to kicking a soccer ball. This marks the beginning of a trend.

Efforts in developing human-shaped robots underline a global shift in robotics use from pre-programmed mechanical arms in limited situations like factories to functioning in the real world with people.

(Click Here for more about Toyota’s $2.8B plan to create a company to build autonomous vehicles.)

Though it did miss a few shows – and experience a power failure in the process – Cue 3’s role is more symbolic than practical. The robot’s name says it all, meaning it can be taken as a cue of things to come and to allow engineers to demonstrate their abilities, raising morale in the process.

Cue 3 almost looks like a person wearing a black and red basketball tank, but the outer covering of the robot is black and looks like a cross between chain mail and armadillo shell. Toyota’s history with robots came into play today as well.

The company’s made other robots, including one that played a violin. Another, resembling R2-D2 of Star Wars, slides around and picks up things, it handed the basketball to Cue 3 for the demonstration. While experts note that robots can tackle many of the tasks that humans can – one only needs to visit the nearest automotive assembly plant to see that in action – basketball-playing robots are a ways off.

(To see more about Toyota’s plans up to now for an autonomous vehicle, Click Here.)

“In 20 years, with technological advances,” Tomohiro Nomi, a Toyota engineer who worked on Cue 3, believes robots will be able to dunk, which means being able to run, dribble and jump.