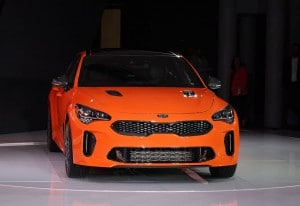 Kia's new Stinger GTS package allows drifters to go all out while still having all-wheel drive.

For a brand traditionally known for affordable, albeit plain-vanilla products, Kia delivered a major shock when it rolled out the Stinger sports sedan two years ago. Stinger quickly nabbed a string of awards and was a finalist for North American Car of the Year.

Now, the Korean carmaker wants to increase Stinger’s appeal with performance-oriented buyers, introducing a new version, the GTS, which adds a new all-wheel-drive system, dubbed D-AWD, that can let a driver drift to their hearts content.

Set to reach showrooms later this year, the Kia Stinger GTS will remain one of the most affordable vehicles in its segment, with a base price of $44,995 for the rear-wheel-drive version, and $47,495 with D-AWD.

Like the standard-issue Stinger, the GTS is powered by a twin-turbo, 3.3-liter V-6 punching out 365 horsepower and 376 pound-feet of torque through an eight-speed automatic. The base configuration has power going to the rear wheels. 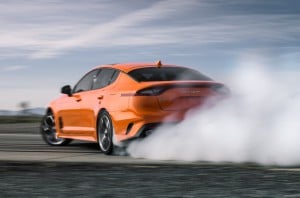 The GTS is powered by a twin-turbo, 3.3-liter V-6 punching out 365 horsepower and 376 pound-feet of torque through an eight-speed automatic.

The optional D-AWD drift-based system will retain its ability to handle poor traction situations, much like the original all-wheel-drive package offered on the stinger. But it will now have more driver-selectable operating modes. In “Comfort,” 60% of the torque from the V-6 will go to the rear wheels, that jumping to 80% in “Sport.”

Switch to “Drift,” however, and that jumps up to 100% rear bias. In that mode, Stinger’s steering, transmission and nanny features, such as stability control, are also modified to allow a driver to hang out the tail.

The other key addition on D-AWD models is a limited-slip differential. Previously, that was offered only on rear-drive Stingers.

Beyond that, the GTS is largely an appearance package, starting with the optional “Bright Orange” paint. There’s now a distinctive “Stinger” script that replaces the Kia logo on the trunk, along with carbon fiber trim on the grille, side vents and mirrors. And, inside, the steering wheel and headliner get an Alcantara-like faux suede finish.

Other special features include a 720-watt Harman/Kardon audio package and a new wireless Qi charging system.

In an SUV-oriented market, Stinger sales haven’t been as strong as the brand might have expected when it originally gave the sports sedan the green light, though it has done a great job of burnishing the image of a brand in the midst of a major transformation.

(For a review of the new Kia Telluride, Click Here.)

The arrival of the Stinger GTS could enhance that halo effect, though Kia says it only plans to produce 100 copies of the special drift edition.