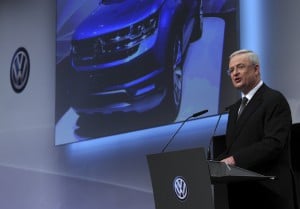 Volkswagen’s ongoing efforts to end a scandal triggered by its cheating on diesel emissions testing just took a turn for the worse, the Securities and Exchange Commission accusing both the automaker and former CEO Martin Winterkorn of committing a “massive fraud” on U.S. investors.

The automaker has acknowledged it used “defeat devices” to rig its diesel engines to illegally pass emissions tests and has so far laid out over $30 billion in fines and settlements. It is still facing other legal headaches, including a separate lawsuit by investors and ongoing investigations in Europe, one resulting in the arrest and jailing of the former CEO of its Audi subsidiary. But it responded to the latest challenge by declaring the SEC lawsuit “legally and factually flawed.”

The SEC lawsuit, filed in San Francisco, claims the automaker and former CEO Winterkorn concealed the depth of the scandal – and the potential penalties – from both investors and federal regulators. The Thursday complaint noted that in the year before the cheating was discovered and publicized by the EPA Volkswagen issued $13 billion in bonds and securities in the U.S. Those value of those financial devices were directly impacted once the carmaker’s subterfuge was revealed.

(VW expects to sell 22 million EVs over next decade. Click Here for the story.)

The company, the SEC alleges, “reaped hundreds of millions of dollars in benefit by issuing the securities at more attractive rates for the company.” It also said VW “repeatedly lied to and misled United States investors, consumers, and regulators as part of an illegal scheme to sell its purportedly ‘clean diesel’ cars and billions of dollars of corporate bonds and other securities in the United States.”

A 2014 Golf diesel, one of the Volkswagen models involved in the emissions scandal.

The move by the regulatory agency could hit Volkswagen with significant fines and penalties, among recovering any “ill-gotten gains,” funds that would not have been accrued had investors known of the risks related to the diesel rigging.

The SEC also wants to bar Winterkorn from ever serving as an officer or director of a public company operating in the U.S., though with his reputation in tatters, that is not thought likely.

Now 74, the German-born executive was known as a micro-manager, something that resulted in extensive skepticism when Winterkorn claimed to have no knowledge of the rigging of the diesel engines that were a hallmark of his tenure at the automaker.

Winterkorn has been under investigation in Germany, as well as in the U.S. Few expect him to ever return to the States where he could face the possibility of arrest. That happened when one of the mid-level managers involved in the Volkswagen diesel program passed through the country on the way back to Germany following an overseas vacation. So far, two former employees have been prosecuted, though others facing arrest in the U.S. remain in Germany where there is no extradition treaty in place to cover the allegations.

Since the allegations of cheating first surfaced in September 2015, Volkswagen has taken a largely deferential approach, quickly acknowledging the subterfuge and striking out to settle complaints with other federal agencies, as well as regulators in California. It has so far spent over $30 billion, some of that money even going into a fund to help promote a shift to electrification in the U.S. automotive market. 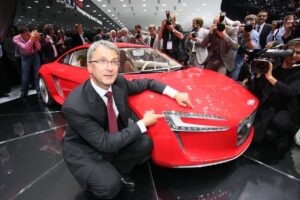 Former Audi CEO Rupert Stadler was jailed for four months for his role in the scandal.

The automaker is taking a tougher stand on the new SEC complaint, however, contending that it “is legally and factually flawed, and Volkswagen will contest it vigorously. The SEC has brought an unprecedented complaint over securities sold only to sophisticated investors who were not harmed and received all payments of interest and principal in full and on time.”

As for Winterkorn, VW’s response said he “played no part in the sales” of the securities.

Beyond the new SEC lawsuit, VW still has other legal headaches to deal with stemming from the cheating scandal, including a lawsuit by investors in the U.S. and criminal probes in Germany. They could stretch out the automakers problems for some time to come.

(VW planning to cut 7,000 jobs in Europe. Click Here for the latest on that story.)