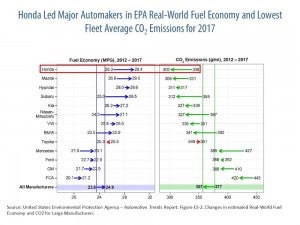 Honda leads all automakers in fuel economy rankings, according to a new EPA report.

If you’re looking for a real gas miser of a vehicle, start with Honda. The Japanese automaker is the most fuel-efficient automaker in America says a new report from the U.S. Environmental Protection Agency.

Honda has the highest fleet average fuel economy and lowest carbon dioxide emissions of any major automaker for the 2017 model year, the latest year for which full data is available, according to the report.

Mazda had previously held the title for three consecutive years, and came in second behind Honda. Hyundai, Subaru and Kia round out the top five when it came to fuel economy numbers.

The 2019 EPA Automotive Trends Report ranked Honda first with a U.S. fleet average fuel economy of 29.4 miles per gallon (mpg), a five-year improvement of 3.1 mpg, and 4.5 mpg above the industry average.

Similarly, Honda’s fleet-average carbon dioxide emissions reached an industry low of 302 grams/mile, an improvement of 36 grams/mile from 2012 results and 55 grams/mile better than (below) the industry average for the 2017 model year.

“Honda is proud to play a leading role in the move toward a more efficient, low-emissions mobility future and it’s encouraging to see the industry as a whole making significant gains, despite low fuel prices and the market trend toward trucks and SUVs,” said Robert Bienenfeld, assistant vice president of Energy and Environmental Policy for America Honda Motor Co. Inc.

“There’s a lot of work still to be done, but with record sales and production of Honda electrified vehicles and more planned, we are committed to continue improving our fuel economy performance.”

(Click Here to see why oil-rich Norway is the land of the electric vehicle.)

In all, 12 of the top 13 automakers in the U.S. showed improvement during the period with Toyota being the only maker that showed a decrease. Overall, auto companies their average fuel economy jumped from 23.8 mpg to 24.9 mpg.

However, Honda’s jump is impressive. The company set new all-time records for sales and production of electrified vehicles in America last year, including the newly introduced 2019 Insight hybrid sedan and redesigned 2019 Accord Hybrid.

The Honda Clarity series of vehicles, which launched in 2017 and now features battery electric, fuel cell and plug-In hybrid variants, has also contributed to the company’s increased alternative fuel vehicle footprint and reduced carbon dioxide emissions. The increases were well received by the EPA, but the agency called for continued diligence.

“Today’s report shows that while the auto industry continues to increase fuel economy, there are legitimate concerns about the ability to cost-effectively achieve the Obama Administration’s standards in the near future,” said EPA Administrator Andrew Wheeler. “EPA and DOT will have those concerns in mind as we move forward with our Safe Affordable Fuel Efficient Vehicles rule, which would allow the industry to meet aggressive yet attainable standards, reduce the price of new vehicles, and help more Americans purchase cleaner, safer, and more efficient vehicles.”