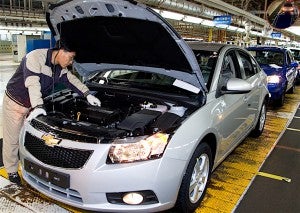 GM sold the Gunsan plant it closed last year to Myongshin, an auto supplier that is part of a larger consortium that will build EVs there.

General Motors sold a recently closed plant in Gunsan, South Korea, to Myongshin, a South Korean supplier, for $99.5 million. A supplier to Tesla, the company said it plans to build EVs at the site, Reuters reported.

Myongshin is part of a consortium that plans to spend more than $170 million on the plant, which will build electric vehicles, according to a statement from the provincial government. The government added the plans call for the factory to churn out 50,000 electric vehicles annually by 2021 and 150,000 by 2025.

“We aim to close this deal as soon as possible to ensure that there will be ongoing economic activity,” GM Korea said in a statement.

So does this mean it’s going to build Teslas? No. Myongshin, which also supplies Hyundai, and the consortium is in negotiations to build a different company’s vehicle, according to Reuters.

GM has struggled in South Korea and in other parts of Asia and has been looking to make cuts there. It closed the Gunsan plant last May, cutting thousands of workers in the process. The new ownership means the creation of 900 jobs there and an additional 2,000 at suppliers, the government noted.

South Korea is an appealing place to manufacture vehicles, especially EVs, as the country enjoys a free trade partnership with the U.S. and Europe. It also has a robust number of EV suppliers, which could make the conversion of the plant to EVs simpler and quicker.

(Click Here for details about GM shutting one Korean plant, considering fate of others.)

Producing the 150,000 vehicles seems ambitious, but until it’s determined what vehicle the company is building, it’s difficult to speculate on the veracity of such a claim.