The Renault-Nissan-Mitsubishi Alliance is making plans with Waymo to find ways to exploit the ever-changing mobility world.

The Renault-Nissan-Mitsubishi Alliance, which is preparing to hang together in the post-Ghosn era, plans to join Google’s camp for developing autonomous taxis and other services using self-driving vehicles.

The automakers intend to work with Waymo, a Google spinoff that is among the leaders in technology for self-driving cars. The companies are in the final phase of talks, and plan to announce the arrangement as early as spring, according to a Japanese news service.

The partnership would unite a car alliance whose global sales totaled 10.8 million automobiles in 2018 with a developer whose self-driving vehicles have traveled more than 10 million miles on U.S. public roads as of October. Waymo has forged similar deals with Fiat Chrysler Automobiles and Jaguar Land Rover, but the Nissan-Renault-Mitsubishi alliance boasts greater scale.

Nissan’s pivot to embrace a major outside partner in self-driving marks an attempt to catch up in a field where the alliance trails its rivals. BMW and Ford Motor plan to have fully automated driving systems commercialized around 2021, a year ahead of Nissan’s 2022 goal.

The alliance of Nissan, Renault and Mitsubishi and Waymo will cooperate in what is known as mobility as a service, or MaaS, a shift from vehicle ownership to the use of on-demand transportation. Possibilities include developing a fleet of driverless taxis using Nissan vehicles and a system that handles reservations and payments. 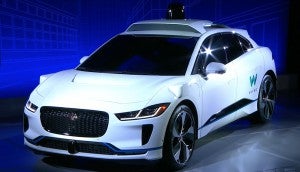 Jaguar will provide up to around 20,000 vehicles for Waymo's ride-sharing service, and may provide a blueprint for its plans with Renault-Nissan-Mitsubishi.

Waymo debuted a commercial self-driving taxi service in Phoenix late last year. Renault’s strong presence in electric cars offers the Google affiliate a chance to be at the forefront of establishing standards for next-generation vehicles.

Google is a key player in developing infrastructure for onboard services, with products such as Google Maps. The Alliance, with its wide reach in Asia and elsewhere, can help the company launch self-driving technologies in more markets.

The enormous cost of the autonomous vehicle technology is forcing both tech companies and automakers to forge alliances that spread the risks and the potential rewards of autonomous vehicles, which also would create new forms of mobility services and ultimately vehicle ownership.

(Click Here for more about how the Ghosn scandal threatens the Renault-Nissan-Mitsubishi Alliance.)

Under Ghosn, Nissan, Renault and Mitsubishi had shared automation technology with an eye towards sparking a quick commercialization of collision avoidance and driver assistance systems. The group has also forged some partnerships with outside developers.

Nissan teamed with U.S. space agency NASA in 2015 to develop remote control technology and Japanese online services developer DeNA in 2017 to create a hailing service with automated driving. In September, the alliance decided to fully introduce Google’s Android operating system in its onboard information systems starting in 2021.

Nissan has been relying more on outside resources to develop connected cars, automated driving, sharing services and electric vehicles — new areas of auto industry competition collectively referred to as CASE. The automaker decided to sell a battery subsidiary in 2017 and now procures the component from Chinese and other suppliers.

Under Ghosn, the alliance tended to put practical gains ahead of other considerations in choosing partners. The new leadership chosen following Ghosn’s arrest in Japan looks likely to continue this course.

Rival automakers also are expanding their partnerships with other industries. Toyota Motor is collaborating with Uber Technologies to advance the Japanese company’s Guardian driver assistance system. Toyota plans to release self-driving cars with Uber’s software and the Guardian system in 2021. It also is cooperating with SoftBank Group to popularize its e-Palette, an electric vehicle for mobility.

In addition, Honda has teamed up General Motors Corp. through GM’s Cruze Automation unit to develop AV technology that GM expects to have on the road by 2021.