The bikes can travel nearly 40 miles on a charge. 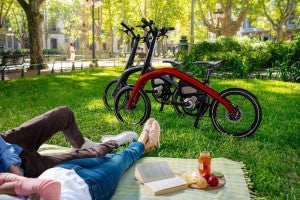 General Motors is taking the first step in launching its bike business by launching ARĪV, its new eBike brand in Western Europe.

GM sold off its European passenger car business to PSA in 2017 said the ARĪV line will includes two innovative, integrated and connected eBikes: the Meld, a compact eBike, and the Merge, a folding eBike. The name ARĪV was selected as part of a global crowdsourcing campaign announced in November 2018.

“The crowdsourcing campaign allowed us to bring consumers into the development of our brand,” said Hannah Parish, ARĪV director. “Combine that with our products and our blend of bike and automotive talent, and the result is a unique brand DNA.” 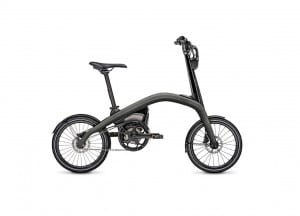 In Germany, the eBikes are slightly less expensive. The ARĪV Meld is 2,750 euros and the ARĪV Merge is 3,350 euros.  GM expects to begin shipping to customers during the second quarter of 2019.

ARĪV used GM’s automotive-grade capabilities to set high standards for the bike’s engineering. GM’s extensive experience with electric vehicle motor software and controls greatly influenced the proprietary GM motor that was built from the ground up specifically for ARĪV.

The motor delivers top-of-segment power and torque for its size. It can travel at speeds of a little more than 15 miles per hour with four levels of pedal-assisted power. Riders can charge their ARĪV eBike’s battery in approximately 3.5 hours and range is nearly 40 miles on a single charge, GM said.

GM also made a point of saying the ARĪV eBikes were engineered and designed in GM facilities in Michigan and Oshawa, Ontario, where GM has created an “Urban Mobility Division.” In November, GM also announced it will be closing factories in Oshawa and Michigan. 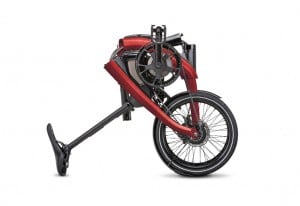 The ARĪV Merge eBike folds up and can be rolled on its wheels for convenient transport.

However, GM did not say where the new eBikes would be built, though China is thought to be most likely source. China is the world’s largest market for eBikes.

The ARĪV design team combined its automotive and cycling experience to create a design that addresses the needs of urban commuters and features such as internal cable routing to yield a modern design.

The compact design of both models allows for easier transit and more convenient storage. The ARĪV Merge folds easily, allowing customers to conveniently roll the bike on its two wheels while folded.

Both bikes connect with the ARĪV eBike app via Bluetooth. The app provides riding metrics such as speed, distance, remaining battery level, motor assist level, distance traveled and more. Additional features are planned for the app including a mode that will use a proprietary algorithm to help riders arrive at their destination sweat-free.

Each ARĪV Merge and Meld comes equipped with a Quad Lock mount, a market-leading system to securely attach a smartphone to the eBike. An integrated USB port allows riders to maintain their phone’s charge while on the go.