CEO says its too costly to keep the program. 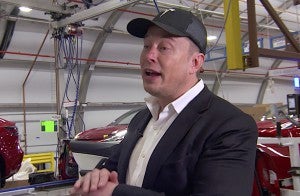 Musk is cutting the referral program as the EV maker looks to cut costs and improve profits.

Tesla CEO Elon Musk means business when he talks about cutting costs to improve profitability. The company’s founder tweeted the company will eliminate the customer referral incentive plan on Feb. 1.

Musk wrote the referral program is ending because “it’s adding too much cost to the cars, especially Model 3.”

The program was introduced in 2015 by the EV maker, aimed at luring buyers and creating disciples. The owners were given personal referral codes providing them with six months of free supercharging and prizes for existing owners such as launching personal photos into deep space or invites to a Tesla event.

Tesla’s referral incentives are of the automaker’s unconventional marketing and sales practices that sees Tesla operating its own stores and kiosks. However, the company does not use franchised dealers or traditional advertising and marketing.

Investors have been putting the pressure on Musk to bring him a profit after years of steady losses. He managed to do that in the third quarter of 2018 as production levels of the Model 3 finally exceeded 5,000 units a week for most of a quarter.

Upon announcing the profit, Musk said he expected to be profitable every quarter “going forward.” The company hasn’t yet announced its fourth quarter and full year results to see if he’ll make good on that premise.

(Click Here for more about Tesla’s Gigafactory in Shanghai.)

The company did break ground on its Gigafactory 3 in Shanghai last month. The new plant, which Musk expects to churning out lower-contented Model 3 sedans as well as the company’s next vehicle, the Model Y, a midsize sport-utility, when it hits the market. He said that plant could be up and running before the end of 2019