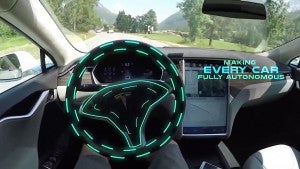 Hoping to follow in the footsteps of Mobileye, which has made its vision technology essential to automated vehicles, Israeli technology company Arbe is unveiling technology that could be used to enhance vehicle automation.

Kobi Marenko, CEO of Arbe Robotics, said the beta version of Phoenix enables evaluation and development towards production and full commercialization of 4D imaging radar for all levels of vehicle autonomy. Phoenix provides an image 100 times more detailed than other radars available to automakers and offers clear separation of stationary and moving objects in real time – an industry first, he said.

“The launch of our radar’s front-end system is a major step toward making our vision a reality,” Marenko said. “The advanced functionality achieved by this launch will transform the radar’s role from a supportive sensor to the backbone of the autonomous driving sensor suite for all levels of vehicle autonomy.”

While current radars have up to 12 channels, Phoenix is 100 times more detailed, supporting more than 2,000 virtual channels with two transmit devices and four receiving devices. The system allows Phoenix to track, separate and identify hundreds of objects simultaneously to deliver a highly detailed image of the environment in a wide field of view and at long range, in addition to separating objects by elevation.

“The advanced safety achieved through high-resolution images, separation by elevation, and the elimination of false alarms would resolve many of the factors behind recent autonomous vehicle accidents,” said Marenko.

“To achieve the next level of vehicle autonomy, it is essential for automakers to leverage a robust radar. The launch of the Phoenix places Arbe in an excellent position to lead this market,” he said.

Arbe is a recipient from Frost & Sullivan of the Global Technology Innovation Award, which recognized the company’s radar system for the automotive environment, along with its future business value in terms of scalability, application diversity, technology licensing and human capital.

Additionally, by leveraging the 22nm RF CMOS process, Phoenix dramatically reduces costs while consuming the lowest power per channel in the industry.

Arbe is the world’s first company to demonstrate ultra-high-resolution 4D imaging radar with post processing and Simultaneous Localization and Mapping, which is disrupting autonomous driving sensor development by bridging the gap between radar and optics.