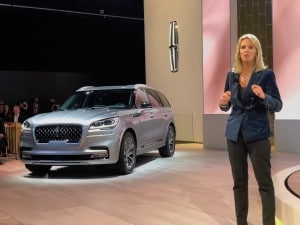 Lincoln hopes its long-awaited revival can take off with the introduction of the all-new Aviator, the latest in a series of new or completely updated utility vehicles from the long-struggling Detroit luxury brand.

The Aviator replaces the old and largely unloved Lincoln MKT, adopting a new design, a lot of new technology and the most powerful engine Ford Motor Co.’s luxury brand has ever offered with its optional plug-in hybrid package. It also helps Lincoln shed the alpha naming strategy that had largely confused potential buyers.

“Aviator is aptly named because Lincoln is at the take-off point,” Joy Falotico, the brand’s new president, said during a media sneak preview ahead of the official unveiling of the big SUV at this year’s Los Angeles Auto Show.

The new Aviator picks up on the latest trend in crossover-utility vehicles, opting for more traditional SUV-like styling, rather than the ungainly shape of the old MKT which many critics likened to that of a hearse. 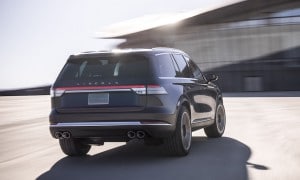 It has a strong, upright nose featuring the distinctive grille first seen on the Lincoln Continental concept which basically is comprised of small versions of the Lincoln logo. The LED headlamps are more slit-like and flow into the front quarter panels. The roof is only slightly rounded, skipping the coupe-like shape any other brands have been adopting. But that helps provide plenty of headroom for occupants in all three rows. That said, it’s not a box. The sides and hood feature just enough sculpting to give the ute an elegant feel.

On the whole, the 2020 Lincoln Aviator, in production trim, hews close to the design of the Aviator concept that was first shown at the New York Auto Show last spring.

The Aviator will slot into a growing Lincoln line-up of utes between the gargantuan Navigator and the smaller Nautilus – the latter model refreshed for 2019 and replacing the old Lincoln MKX.

The Aviator is the first model based off a flexible new architecture that, Lincoln officials hinted, will be used for a number of future models. (Whether that will include products carrying the Blue Oval Ford badge, as well, they wouldn’t say.) The unibody platform can handle both transverse and longitudinal engine layouts. But what is, perhaps, more significant, is that it was designed specifically to allow for electrification.

Whether that would allow for full battery-electric power is something that Lincoln also wouldn’t discuss, though Aviator engineering chief John Davis did note that the new architecture has room for a large battery pack below the load floor. That approach, while not quite the skateboard design used by Tesla and others, does let it avoid compromising passenger and cargo space with a drivetrain like the optional plug-in hybrid that will be offered for the Aviator. 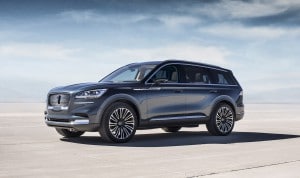 The Aviator slides into the slot between the Navigator and the Nautilus in Lincoln's SUV-oriented line-up.

Both the standard and PHEV versions will start out with a 3.6-liter twin-turbo gas engine feeding torque through a 10-speed automatic. In “base” form, it will deliver 400 horsepower and “at least” 400 pound-feet of torque, Davis said.

The plug-in found in the Aviator Grand Touring model will bump that up to a minimum 450 hp and 600 lb-ft, Ford apparently still finalizing the numbers. But Davis stressed that this will man “nearly instantaneous torque,” one of the real pluses of performance-oriented electrified drivetrains. Whatever the final figures, the Aviator will become the most powerful Lincoln ever offered.

The Aviator has an adaptive suspension that also includes “Road Preview” which anticipates bumps and potholes and adjusts each corner independently.

Even so, the SUV will follow the “Quiet Flight” mantra the Lincoln brand has adopted. It isn’t trying to match the flash and machismo of many of its import luxury competitors. That will start, as it would suggest, with an extremely quiet and low stress interior. 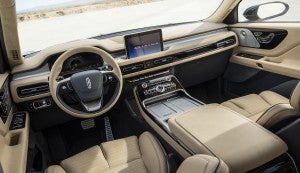 As is expected, the new Aviator's interior offers smart design and plenty of comfort.

If you’re a bit tense, in fact, you have three different massage settings to choose from with the 30-way power driver’s seat. Meanwhile, Lincoln continues to simplify the control system. That includes twin rockers on the steering wheel, rather than the overwhelming assortment of buttons and toggles found in many modern luxury cars. Even the voice control button has been relocated on the wheel for easier reach. And the large touchscreen handles most key functions, though there is a volume knob and hard climate controls.

Add a wide range of tech features, including WiFi and a 12.3-inch reconfigurable instrument cluster. There will be two up-level Revel audio packages, including one featuring 28 speakers. That includes several in the headliner meant to give spatial height  to your music.

And, speaking of sound, the Aviator skips the traditional electronically generated warning tones for unique audio cues that were recorded for the brand by members of the Detroit Symphony Orchestra.

Add a couple of other nice new tech functions: starting with the ability to leave your keyfob at home and replace it with a smartphone app. There’s also a simplified auto-park system that simply requires a driver to hold down a button without having to also operate the brake and throttle.

(For more on the new Lincoln Aviator, Click Here.)

Lincoln stalled out in the 1990s and has been struggling to regain momentum ever since. It’s started to move forward with new offerings like the compact MKC and the recent remake of the Navigator. It has also been picking up traction in the big Chinese luxury market. The new Aviator could be just what the Detroit brand needs, as Falotico suggested, to really take flight.