The Jeep Wrangler led Fiat Chrysler to a 16% sales jump in October. The vehicle is setting new sales records.

Fiat Chrysler Automobiles N.V., Honda and Volkswagen of America set the mark for industry sales in October, reporting sales increases, while rivals such as Ford Motor Co, Toyota and Nissan struggled as sales of new vehicles slowed in October.

FCA’s 15% jump in sales was paced by Jeep, particularly the new Jeep Wrangler, which is setting sales records, and the Ram brand.

Honda, meanwhile, said its sales increase by 6.4% thanks not only to strong sales of its trucks and sport-utility vehicles, but also of its electrified vehicles, which set a record for the second consecutive month, according to the company’s sales release.

Ford reported a 3.9% drop in sales as its passenger car sales continues to sink. Nissan also reported an 11% sales decline as it continued to ease back on incentives. Toyota reported a 1.7% sales increase, but Lexus said its sales dipped by 1%.

(New vehicle sales expected to cool in October. Click Here for the story.) 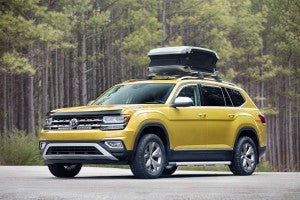 With the help of the new, 3-row Atlas, VW is posting monthly sales gains.

“Our SUVs have given us a lift all year,” said Derrick Hatami, executive vice president of sales, marketing and after sales for VWoA. “As we’ve shifted the portfolio over the past year with the Atlas and the new Tiguan, we’ve been able to move fairly quickly to be more in line with demand and consumers are responding,” he said.

While General Motors did not release October sales, the Cox Automotive team is estimating the company delivered sales better than our initial forecast of 229,000, a 9.4% drop vs. year-ago levels. Considering market performance in October, our revised estimate for GM puts October sales at 242,000, down roughly 4% from last year.

“The domestic-brand truck wars are alive and well, as consumers take advantage of new models, terrific incentives, and a hot job market. Increasing gas prices have little effect on consumer choices as functionality and utility continue to rule the day. Pickup trucks are some of the most luxurious and well-equipped vehicles in showrooms,” said Rebecca Lindland, executive analyst for Kelley Blue Book.

The new Chevy Silverado and GMC Sierra are prime examples of full-size trucks that drive a lot smaller than they look, making it a pleasure to use these vehicles on a day-to-day basis, and the new Ram 1500 shows substance and style are an unbeatable combination.

And yet, despite all the new competition, the F-150 remains up year-to-date and outsold all Ford SUVs combined in October, further proof there’s nothing quite like a pickup truck, she added.