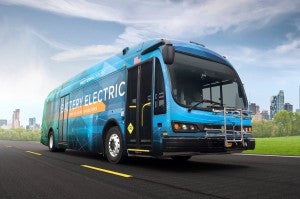 Daimler Truck has invested millions in California-based electric busmaker Proterra to help with its battery-electric development.

Daimler Trucks & Buses agreed to put up part of a $155 million investment in an electric bus company founded and based in the United States.

Martin Daum, member of the Board of Management of Daimler AG with responsibility for Daimler Trucks & Buses, noted Proterra has emerged as a leader in the electric-bus business with more than 90 customers across the United States.

Proterra and Daimler also have entered into an agreement to explore the electrification of select Daimler heavy-duty vehicles, beginning with Daimler’s Thomas Built Buses division by bringing Proterra’s proven battery and drivetrain technologies to the North American school bus market.

(California pushes ahead with promotion of zero-emission vehicles. Click Here for the story.) 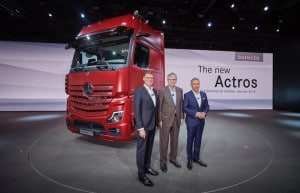 Daimler's Martin Daum, center, expects the investment in Proterra to have an impact in the short term.

Most school buses travel a predictable distance per day that is well within the capability of Proterra’s EV technology to provide reliable, affordable transportation options with environmentally sustainable, zero-emission EV technology.

“We started working on electric trucks and buses at a very early stage and we aim to set the standards here in each relevant segment,” Daum said.

“We expect the cooperation with Proterra to deliver additional impetus for the development of heavy-duty commercial vehicles with electric drive. In this way, we are broadening our scope in particular concerning the key technology of the battery – also with regard to North America.”

Daum added that Daimler Trucks & Buses, which is scheduled to become a separate company when Daimler reorganizes next April, is pushing forward with electric mobility.

Daimler Trucks now plans to unveil an extensive range of electrically powered commercial, including year during the annual IAA truck show in Hannover, Germany. Vehicles set for unveiling include the battery-electric eCitaro city bus to the all-electric eActros, which is already in customers’ hands, to the E-Fuso Vision One vehicle study, which is a preview of a fully electric heavy-duty truck from the E-Fuso brand, Daimler officials said.

The eActros features 11 battery packs inside and below the chassis, with a usable total capacity of 240 kWh. It’s driven by electric motors close to the wheel hubs with a maximum output of 2 x 126 kW. The additional weight of approximately 2.5 tons compared with conventional drive is partly offset by the increase in the permissible gross vehicle weight in the EU of one ton for trucks with alternative drive systems.

The all-electric light-duty Fuso eCanter is also in regular use – meanwhile with various customers in major cities in North America, Europe and Asia. The light-duty truck’s six batteries with a total capacity of 82.8 kWh allow a range of more than 100 kilometers, which is more than many customers require for daily deliveries in urban areas.