An early version of a Waymo-modified Chrysler Pacifica Hybrid minivan roams the streets of Phoenix.

Fiat Chrysler Automobiles and Waymo will radically accelerate their alliance, FCA announcing it will supply as many as 62,000 more Chrysler Pacifica Hybrid minivans to the autonomous vehicle spin-off of Google.

FCA previously committed to providing several thousand of the plug-in people-movers. Waymo has also committed to purchasing up to 20,000 Jaguar I-Pace battery-electric SUVs, and CEO John Krafcik has told TheDetroitBureau.com that it expects to add still other models for use in the planned self-driving ride-share service that is currently in pilot testing in Phoenix. Commercial service will launch in that city later this year, Krafcik announced in March, and will eventually expand to “other” cities across the U.S.

GM Cruise and Waymo are considered two of the leaders in the development of autonomous and even more advanced, fully driverless vehicle systems. 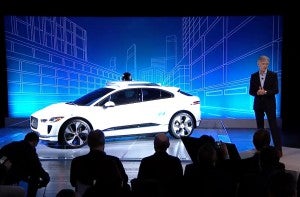 The Google spin-off has clocked millions of miles testing prototypes on public roads, and millions more in digital simulations. At one point, it toyed with developing its own vehicles, going so far as to build about 100 bubble-shaped prototypes, but Krafcik, a former Hyundai Motor America CEO, has scotched the idea of getting into the highly competitive and comparatively low-margin auto manufacturing business. Instead, he is focusing on developing self-driving software and the sensor hardware needed to make it work.

In turn, Waymo is forming alliances with automakers like FCA and Jaguar who may not have their own autonomous vehicle programs, or who lag behind industry leaders.

FCA was the first to pair up with Waymo, initially providing a handful of plug-in Chrysler Pacifica Hybrid minivans that the tech firm modified for autonomous operation. It subsequently ordered as many as 5,000 of the people-movers, but now will take up to 62,000 more.

Though FCA may eventually offer self-driving vehicles through its retail sales network, the Waymo deal is focused on the tech firm’s planned ride-sharing service. It already operates a small fleet of vehicles in the Phoenix area and earlier this year received a permit from the state of Arizona to transition that into a commercial ride-sharing service which, Krafcik said, will begin operating by the end of this year.

“Waymo’s goal from day one has been to build the world’s most experienced driver and give people access to self-driving technology that will make our roads safer,” Krafcik said Thursday in a statement issued jointly with FCA. “We’re excited to deepen our relationship with FCA that will support the launch of our driverless service, and explore future products that support Waymo’s mission.”

For his part, Fiat Chrysler CEO Sergio Marchionne said his company “is committed to bringing self-driving technology to our customers in a manner that is safe, efficient and realistic. Strategic partnerships, such as the one we have with Waymo, will help to drive innovative technology to the forefront.

The expanding tie-up could prove to be a major boon for the Euro-American automaker, according to analyst Joe Phillippi, of AutoTrends Consulting. The automaker has lagged behind major U.S., European and Asian competitors in the development of self-driving technology, he noted, adding that, “This obviates FCA’s need to spend billions of dollars to get into the autonomous vehicle game.”

There are a variety of different levels of autonomous vehicle technology, starting with so-called Level 2 systems that help a driver maintain their lane and brake in an emergency. More advanced systems just coming to market allow limited hands-free operation. But ride-sharing services are pushing for vehicles that will be able to operate entirely without a driver.

A key reason is that having a human behind the wheel is the biggest cost for a service like Uber and Lyft. By some estimates, the cost of a ride could drop by half with full autonomy, so much so that it would become cheaper to hail a ride than own a personal vehicle, according to Krafcik.

If Waymo meets its target it would become the first to launch a driverless service, leapfrogging ride-sharing giants Uber and Lyft. Both of those companies are also in the hunt, though Uber’s autonomous vehicle program suffered a major setback in March when a modified Volvo SUV struck and killed a pedestrian during testing near Phoenix. The company this month announced it would stop its Arizona program, though it soon plans to resume testing in several other locations, including Pittsburgh, where it has its autonomous research base.

With Cruise Automation, GM is also looking to get into the sharing market. The Detroit giant last year announced plans to launch a commercial autonomous program pairing Cruise technology with the all-electric Chevrolet Bolt EV. It is currently set to launch service in 2019 and will expand on GMs current vehicle-sharing service, Maven.

(For the latest on Uber’s autonomous vehicle problems, Click Here.)