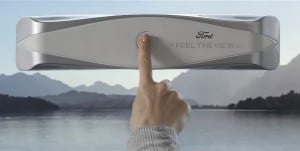 Ford's "Feel The View" prototype converts pictures to vibrations that can be transmitted to a window allowing the blind to "see" outside the car.

Ford Motor Co.’s investing big in mobility ventures, but it’s latest “mobility” innovation named “Feel The View” may be among its most impressive.

The company developed a prototype car window that works in concert with another device that converts outdoor scenery at any given moment into a black-and-white picture that is then changed into vibrations of differing intensities allowing blind passengers to discern the world outside of the car “looks” like at that moment.

The system was designed by Ford Europe in Italy and GTB Roma, in collaboration with Aedo – a local start-up that specializes in devices for the visually impaired.

“We seek to make people’s lives better and this was a fantastic opportunity to help blind passengers experience a great aspect of driving. The technology is advanced, but the concept is simple – and could turn mundane journeys into truly memorable ones,” said Ford Europe spokesman Mac Alù Saffi. 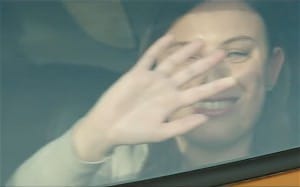 Vibrations in the window can be used to translate an exterior image to blind passengers in a vehicle.

(Ford board may vote next week on purchase of abandoned Detroit train station. Click Here for the story.)

“Feel The View” takes pictures that are turned into high-contrast monochrome images and then reproduced on the glass using special LEDs. By touching the image, different shades of grey vibrate with a range of 255 intensities, allowing passengers to touch the scene and rebuild in their mind the landscape in front of them.

The system is connected to a vocal assistant, which using artificial intelligence, provides context for the picture the person is “seeing,” such as a snow-capped mountain or rolling hills. 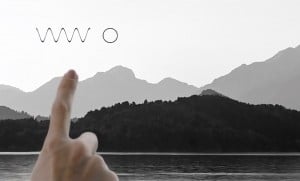 Ford uses different intensities of vibration to differentiate shapes and audio cues for contest in "Feel The View."

The new system isn’t the first time Ford has developed in-car systems specifically to improve the driving experience for the blind. In 2011, the company and several college students developed a system that allowed a blind man to drive a 2011 Ford Escape around the Daytona International speedway.

Mark Riccobono, a blind executive at the National Federation of the Blind, handled the curves, avoided obstacles thrown in his path. Albeit, the ute never traveled faster than 25 mph. However, the GPS-based technology allowed him to navigate the track and any obstacles, include a slower moving van that he passed.

A vibrating seat informed him to speed up or slow down and special gloves let him know whether to turn or move right or left, which was done as part of the Blind Driver Challenge. For the 2014 edition of the event, the company and students introduced haptic feedback to improve the response times and comfort level of the driver.