Walking a Tightrope: Ford Trying to Please All with New Mustang Variants 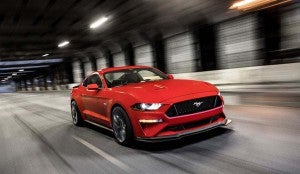 The Ford Mustang is celebrating 54 years, and the current best-selling sports car in the world intends to remain so.

You can’t stand still in the muscle car market. What’s hot today could be all but forgotten tomorrow. That’s something Ford Motor Co. learned when rival General Motors brought back the Chevrolet Camaro in 2010, delivering a sucker punch to the long-dominant Ford Mustang.

Since launching an all-new version of the Mustang to mark the nameplate’s 50th anniversary four years ago, Ford has retaken its crown as king of the pony car hill. It has now been the world’s best-selling sports car for three years in a row.

And Ford is determined to maintain that lead with a series of Mustang variants set to come to market during the next 18 months. That includes not only the latest version of the GT500 but a first-ever Mustang hybrid.

To some pony car fans, the addition of a gas-electric model borders on sacrilege, but it underscores the challenges the Detroit automaker faces in a rapidly changing auto industry. Carmakers not only have to keep on top of shifting consumer tastes, but also cope with new government regulations, including stiffer emissions and fuel economy standards. That mix of factors can pose quite a challenge when you’re dealing with a product as iconic as Mustang. 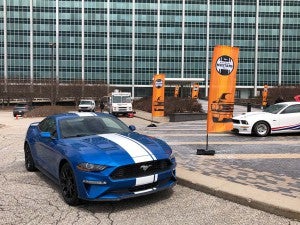 Ford employees, friends and fans celebrated the 54th anniversary of the Mustang at the Glass House.

“Mustang will continue to evolve and strike the right balance between heritage and being contemporary and fitting into today’s society,” Corey Holter, the Ford Group Marketing manager who oversees the muscle car, told TheDetroitBureau.com during an event celebrating Mustang’s 54th anniversary.

The need to honor the car’s heritage became particularly clear with the launch of the latest Mustang. While Ford designers tried to sidestep the overused term, retro, they clearly tried to pick up on the original ’64-1/2 Mustang’s iconic design cues – a strategy that GM designers used successfully when relaunching Camaro after a seven-year absence.

Mustang’s current success certainly depended upon getting the design right, but there have been other factors at work, including significant improvements in its performance and handling. Among other things credit one notable break from tradition: adding an independent rear suspension for the first time to a mainstream version of the 2+2.

Meanwhile, Ford has steadily upped the performance quotient, the latest version of the GT is now the most powerful ever. And, let’s face it, muscle is number one for many fans in this segment.

So, Ford is far from done beefing things up. Among the new variants in the works, the upcoming GT500 is being teased as “the most powerful street-legal Mustang ever,” Ford hinting it will deliver “over 700 horsepower.” How much more? Insiders suggest it will comfortably push past the Dodge Challenger and Charger Hellcat models currently rated at 707 hp, though not the 840 hp Dodge Demon that’s primarily targeted at drag strip fans.

(Click Here for a look at how Germans love the Mustang.)

Even while pushing the limits with its classic 5.0-liter V-8 powertrain, Mustang will shift into a new direction with the debut of its first-ever hybrid model due out sometime during the 2020 calendar year as a 2021 model.

As with the GT500, Ford is being coy with details, though the company stresses that this won’t be a pony car take on the Toyota Prius. Yes, you can expect it will deliver the best mileage ever for a Mustang, we’re promised, but Ford is also hinting the gas-electric pony car will deliver “V-8 levels of power and even more torque.”

Ford already found a ready market for those seeking to balance mileage and muscle when it introduced its first EcoBoost-powered Mustang a few years back. It has proved especially popular as the automaker has started targeting European markets, as well as China, and “a hybrid Mustang will help further unlock Mustang’s potential in some of those markets,” Holter told TheDetroitBureau.com.

That’s the sort of formula Ford will have to keep in mind as it begins working on the next-generation Mustang due to market early in the coming decade. Ford will be weighing a variety of options going forward, even all-wheel-drive, though Holter sees that as unlikely. There’s even the possibility of an all-electric Mustang, several senior Ford sources have told TheDetroitBureau.com, perhaps no surprise considering a number of other manufacturers are considering that concept — and that Ford in January announced plans for an all-electric supercar it has tentatively dubbed the Mach 1. (Coming in 2020, that model is expected to be an SUV.)

But Mustang buyers are both loyal and deeply wedded to tradition, so making too many radical changes could leave them perplexed, confused, even angry. And considering a full third of buyers add a Mustang to their existing personal fleet, the wrong move could be disastrous, as Ford has learned throughout the years with faulty moves like the legendarily flawed Mustang II.

Expect to see future Mustangs make “additive” changes, says Holter, to improve the successful formula that has worked so well with the latest-generation pony car, rather than asking buyers to sacrifice the looks, performance and features they’ve come to expect and love.