An Uber Volvo XC90 was involved in a minor crash, getting flipped onto its side, during a test program near Phoenix last year.

Company’s testing autonomous vehicles and self-driving technologies have one giant fear, a fatality. That fear became a reality last night for Uber as one of its self-driving vehicles killed a pedestrian in Tempe, Arizona.

The incident occurred when the vehicle was in autonomous mode; however, there was a safety engineer behind the wheel, which is standard Uber practice. There were no other passengers in the vehicle at the time.

According to a USA Today report, the woman, who has not yet been named, was crossing outside the designated crosswalk at about 10 p.m. when she was hit, police said.

Uber CEO Dara Khosrowshahi referenced the “incredibly sad news out of Arizona” in a tweet and confirmed the company is cooperating with local law enforcement. 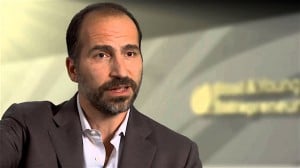 Uber CEO Dara Khosrowshahi tweeted his feeling about the fatal accident involving an Uber vehicle and a pedestrian.

The company also immediately suspended testing in other locations in the U.S. and Canada, as its policy. Uber tests in Pittsburgh, San Francisco and Toronto.

Sgt. Ronald Elcock, a Tempe police spokesman, told USA Today that the car was in autonomous mode with a driver behind the wheel when it hit the pedestrian. The National Transportation Safety Board was sending a small team of investigators to Arizona to gather information about the Uber crash.

(Click Here to see why taking Uber to work is cheaper than driving yourself.)

“As always we want the facts, but based on what is being reported this is exactly what we have been concerned about and what could happen if you test self-driving vehicles on city streets,” said Jason Levine, executive director of the Center for Auto Safety, a Washington-based advocacy group. “It will set consumer confidence in the technology back years if not decades. We need to slow down.”

Although self-driving cars are ultimately expected to be safer than cars piloted by humans, research to develop these vehicles needs to cross into potentially dangerous territory to make the vehicles foolproof.

Researchers and engineers are working on the technology now to try to get it to that level of efficiency. While no one is comfortable with the idea of possible fatalities during testing, companies are now past that point.

This isn’t Uber’s first accident in Tempe involving an autonomous vehicle. Last year, a Volvo XC90 from Uber was hit by the driver of another vehicle. The Uber was in self-driving mode when it was hit by another driver in an intersection after the vehicle failed to yield. She hit the Volvo XC90 hard enough to flip it onto its side.

(To see more about Uber’s settlement with Waymo, Click Here.)

“We’re within the phase of autonomous vehicles where we’re still learning how good they are. Whenever you release a new technology there’s a whole bunch of unanticipated situations,” said Arun Sundararajan, a professor at New York University’s business school. “Despite the fact that humans are also prone to error, we have as a society many decades of understanding of those errors.”