Competition in the segment heating up. 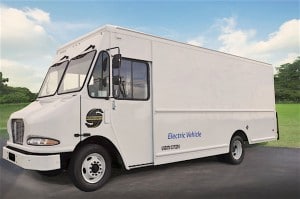 UPS ordered 50 battery-electric vans from Workhorse Group. The company has 35,000 trucks that could be replaced soon.

Companies around the globe have been hustling to develop and produce a viable electric delivery truck, and it appears there is a winner: Workhorse Group Inc. The Ohio-based company just entered into a contract with UPS to replace 50 of the company’s delivery trucks.

“We see this vehicle as being a game changer in the electric truck arena,” Carlton Rose, UPS’ president for global fleet maintenance and engineering told Reuters. The deal calls initially for 50 trucks with a range of 100 miles each.

However, the company has more than 35,000 vans that could be replaced as time and technology improve. UPS didn’t make the move due to some altruistic motive — at least not solely.

“It’s also an industry first because the acquisition cost is comparable to gas and diesel,” Rose said.

(To learn more about Workhorse and its W15 electric truck. Click Here for the story.)

The Workhorse delivery vehicles will cost about the same as conventional trucks but have a lower cost of ownership because they are cheaper to run on a per-mile basis.

Workhorse sold about 300 delivery vehicles to UPS already and has been testing package deliveries with drones for the company. Rose noted the vans are lightweight, which will boost range. The vans will also have fast-charging capability.

The automaker said it will expand production as cheaper, longer-range batteries become available within two to three years. By then the competition should be in full swing as other manufacturers are well along in their projects.

Starting last fall, SAIC Motor Corp. Ltd, Chanje, Ford Motor Co and DHL and Nissan all announced plans to have some sort of electric delivery van/truck ready for work sometime in 2018. Most of the names are familiar, except for Chanje.

Chanje is a unit of China’s FDG Electric Vehicles Ltd. and has a deal in place to deliver 125 EV trucks to Ryder System Inc., the moving and vehicle leasing company. Chanje Chief Executive Officer Bryan Hansel said FDG has spent five years and $1 billion developing the vehicle and has annual production capacity of 100,000 units from its factory in China.

Meanwhile, Workhorse is testing its lightweight N-Gen model, which has a carbon composite frame, in California and Ohio for an unnamed customer, Reuters reported. That vehicle weighs 5,500 pounds when empty, which is 5,000 pounds lighter than comparable vehicles.