Tesla to Hold Musk to a Higher Standard for Compensation

No cash or bonuses unless carmaker hits milestones. 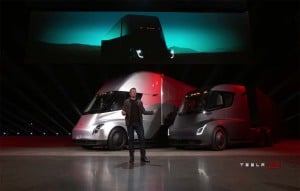 With Tesla still struggling with serious production problems and a balance sheet that has been sinking deeper into the red, the battery-carmaker said Tuesday that its billionaire founder and CEO Elon Musk won’t be in line for any form of compensation until it reaches stock and operational milestones.

While investors continue to back the company, its shares rebounding sharply since a deeper-than-expected third-quarter loss was announced last autumn, there has been growing concern about the delays in ramping up production of the new Model 3. That has raised concerns the company might have to raise more capital to compensation for its rapid cash burn.

“Tesla and all of its shareholders” will have to perform “extraordinarily well before Musk is to receive any form of compensation going forward, the company said. But the announcement also took aim at another concern that some investors and analysts have raised in recent months: whether the South African-born Musk would remain onboard.

“This ensures that Elon will continue to lead Tesla’s management over the long-term while also providing the flexibility to bring in another CEO who would report to Elon at some point in the future,” the statement indicated, while downplaying the possibility Musk might be thinking about giving up his day-to-day duties.

Since going public, Tesla has delivered just two quarterly profits – and then only using its own, non-standard accounting methods. Last November it revealed it lost $2.92 a share for the third quarter. That was well below the $2.45 a share deficit that a consensus of industry analysts had forecast, according to Thomson Reuters.

Production levels of the Model 3 are influencing the amount of compensation Tesla CEO Elon Musk receives from the company.

(Tesla misses by a mile its Model 3 target. Click Here for the story.)

That reflected what Musk had previously described as the “production hell” the company was going through at its Fremont, California assembly plant. Even as the year ended, the Silicon Valley carmaker said it delivered just 1,550 of the “affordable,” long-range electric vehicles during the fourth quarter, well below what industry analysts had been anticipating. Some had forecast the numbers would come closer to 9,000 for the October-December quarter, with even pessimists forecasting something closer to 4,000.

There are few who now expect Tesla to come close to meeting Musk’s original goal of producing 500,000 vehicles in Fremont this year. And many question whether the carmaker will even reach its current target of 5,000 Model 3 sedans by July, the first anniversary of the official start of production.

If Musk hopes to get paid he’s got to hope there won’t be too many more delays. The new long-term plan puts 100% of his compensation at-risk. It’s based on a 2012 award program Tesla set up the executive – who currently holds about 20% of its stock. But the targets are far tougher.

The new plan sets up a 10-year stock option program vesting in 12 tranches, each tied to specific milestones.

“For Elon to fully vest in the award, Tesla’s market cap must increase to $650 billion,” a company statement explained.

That would put it in elite territory, with company such as Apple and Google and far beyond more traditional automakers like General Motors and Toyota. The electric automaker’s market capitalization as of midday Tuesday, hovered just above $59 billion, about $2 billion below GM’s.

The operational milestones, meanwhile, set a series of “escalating” revenue and earnings goals “even more directly aligned with shareholder value creation” than the pay plan Musk had set up in 2012.

The long-term payoff could be substantial, however, each tranche providing a maximum of 1.69 million shares of TSLA. At the current share price that would equal about $600 million. If Tesla were to hit the targeted market cap, however, that could potentially increase by another order of magnitude.

(To see more about Musk “dying” to build a pickup truck, Click Here.)

Tesla says Musk did not participate in determining the compensation plan. It was crafted by the company’s board working with consultancy Comensia Inc. It will go to a vote by shareholders in late March, after Tesla reveals its fourth-quarter and full 2017 financial results.