Mercedes-Benz Doesn’t Believe US is Good Market for Diesel 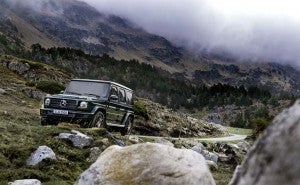 The G-Wagen will not be coming to the U.S. with a diesel-based powerplant, even though it would likely meet all U.S. standards.

Even though it has a redesigned diesel that meets tight new European carbon dioxide standards that will take effect in 2020, Mercedes-Benz has no plans to offer a diesel-powered passenger car in the U.S, according to one of the German automakers top executives.

Ola Kallenius, the head of research and development for the Mercedes-Benz Car Group, said the new diesel engine the automaker has designed is one of the most advanced internal combustion engines ever developed by the automaker.

However, Mercedes has concluded that there simply isn’t enough consumer interest in diesel to warrant bringing it to the U.S. market.

“It does much better on emissions for Europe,” Kallenius said during an interview at the North American International Auto Show.

Mercedes-Benz is planning to offer a diesel engine in the new G-Wagen that it unveiled ahead of the NAIAS. However, the diesel version of the G-Wagen will not be sold in the U.S., Kallenius said.

Throughout the years, Mercedes-Benz has offered various models in the U.S. with an optional diesel engine but it stopped selling diesel-powered vehicles in the U.S. after Volkswagen AG was engulfed in the “dieselgate” scandal that began with VW cheating on emission tests.

Mercedes-Benz, however, is offering a diesel engine in its Sprinter vans, Kallenius said. Sales of the Mercedes-Benz vans have continued to grow as demand has grown in the transport sector. It appears that e-Commerce with its need for package deliver has helped spur sales,” Kallenius said.

Kallenius also said that Mercedes-Benz is capable of building a business case for the 37 different body styles in its product portfolio even as the sport utility vehicles and crossover account for a larger portion of the brands sales.